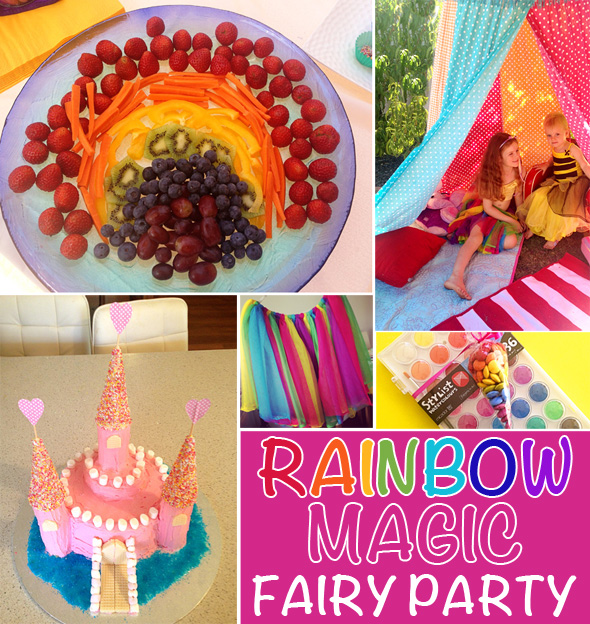 Immy has been mad about the series of Rainbow Magic

books for ages now – there is always a good sized pile of them in our stack of library books! So when the question of a theme for her recent 6th birthday party came up, she wouldn’t hear of anything other than a Rainbow Magic theme. Fortunately there is lots of inspiration for rainbow inspired parties on Pinterest and we have enjoyed a fairy party before, so this one wasn’t too hard to pull together. Here are our rainbow and fairy inspired activities, games, food and cake! 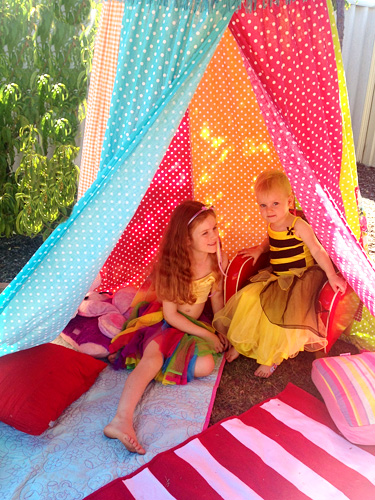 We created a colourful relaxation tent for our nail polish artist (a dear friend) and face painter (I outsourced this one this year – our one big extravagance) to work in. 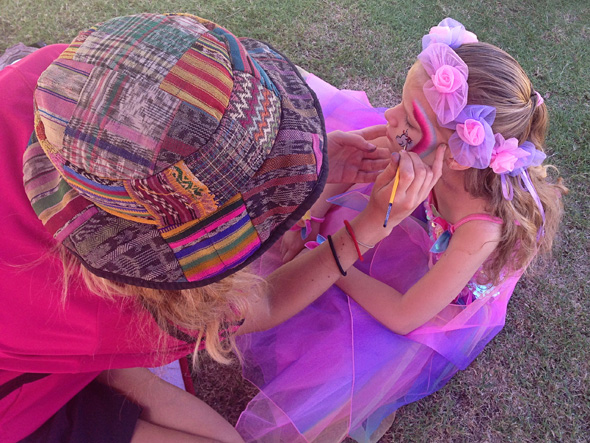 The tented area was also fun for lots of dramatic play for our fairy and elf guests. 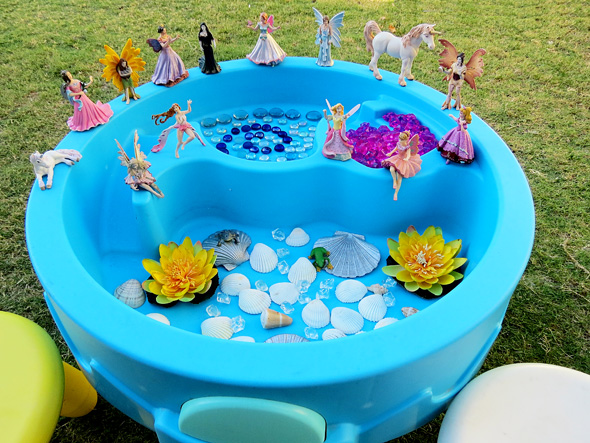 Immy helped me to create a fun small world for her fairy figurines in our sand and water table. We used a variety of fairy stones and shells, and a couple of artificial pond lillies. This area was very popular with our guests. 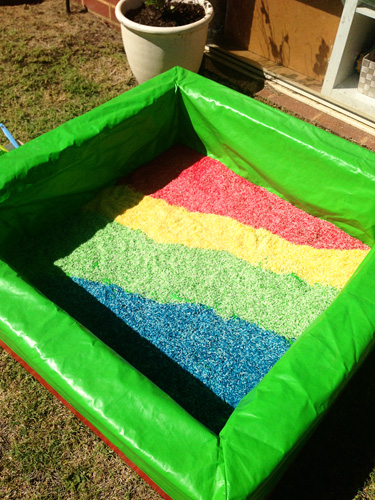 I borrowed a friend’s ball pit and added a rainbow of rice and a variety of scoops, spoons, bottles and containers for pouring and scooping. 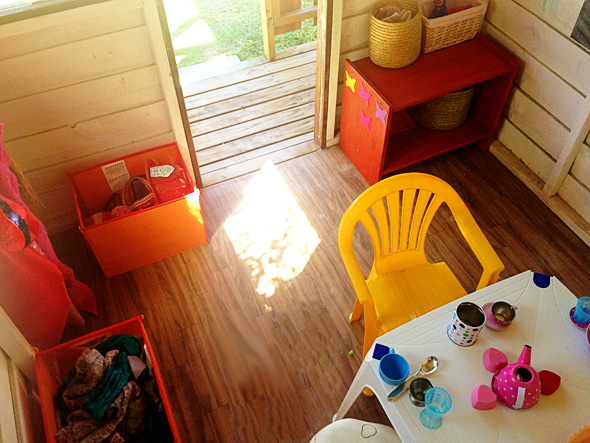 Immy set up a tea party and lots of bright, colourful dress ups and accessories in the cubby house.

We also sprinkled the trampoline with a colourful bed of artificial flowers ( from disassembled Hawaiian-style leis from the dollar store). 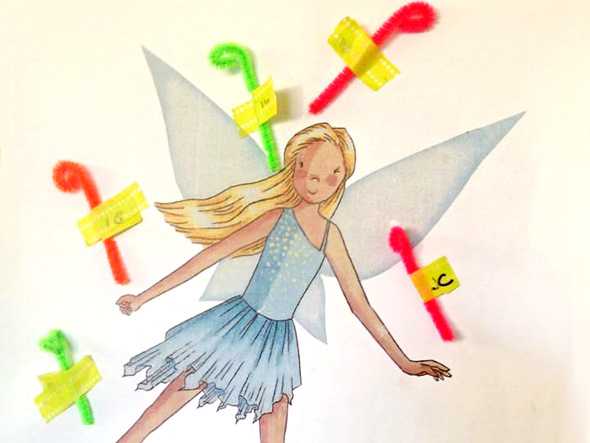 We only played two party games, which was plenty for our crowd of mainly six year olds. First up was ‘Pin the Wand on the Rainbow Magic Fairy.’ I scanned the fairy from the book cover and printed it out on A3 paper, then mounted that onto some poster board. The wands were small pipe cleaners. 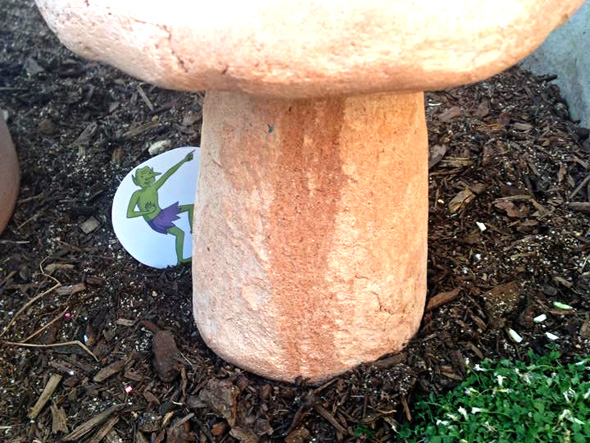 The second game was a Goblin Hunt! For those unfamiliar with the Rainbow Magic books, Jack Frost and his gaggle of goblins are the main protagonists in the books. As we played Pin the Wand on the Fairy, Dad 101 hid a collection of goblin tokens all around the backyard. Each child was tasked with finding two goblins which they could then trade for a prize – a mini notebook and metallic pen. 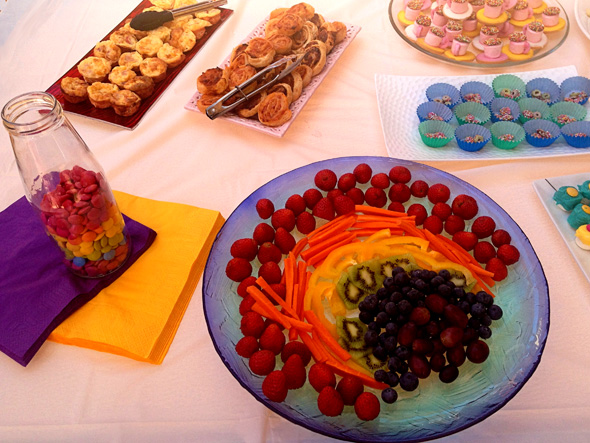 Our party food table was adorned with so many wonderful rainbow colours. 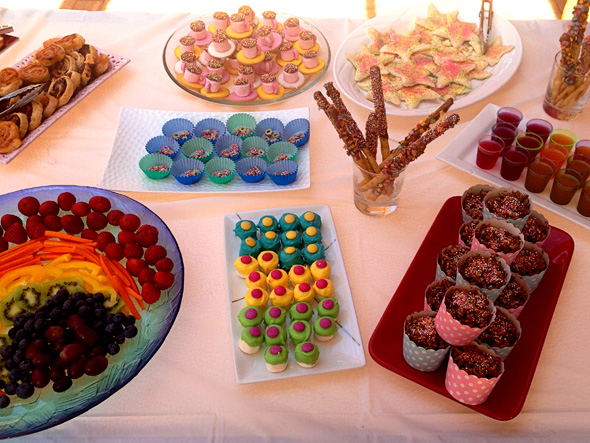 I prioritised foods that could made at least a day before but there were still a few items on my list that didn’t get made in time! The 22 little fairies and elves running around our party garden enjoyed the following for fairy snack time… 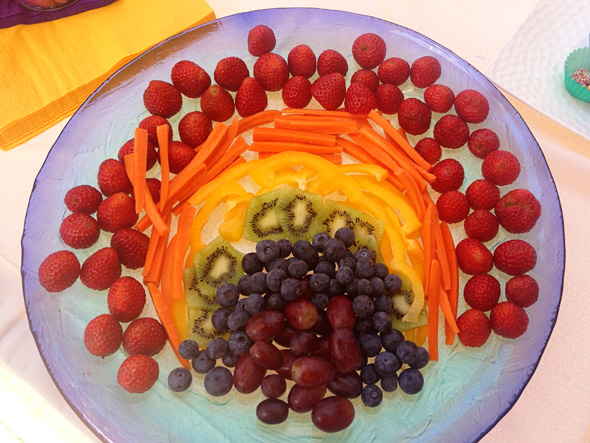 A fruit and vegetable rainbow (time saving tip: wash and prepare the vegetables the day before, cover them in water and refrigerate.) 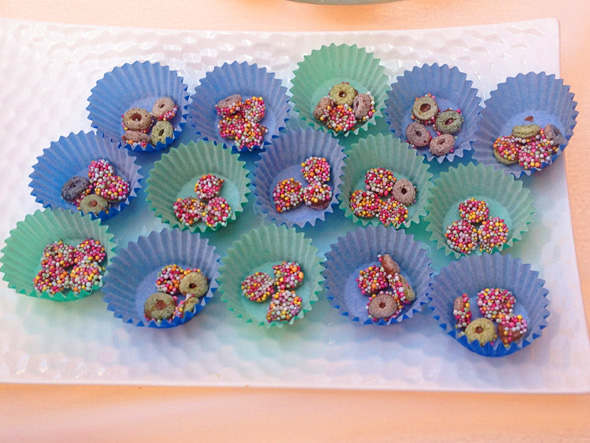 Fairy donuts: small circular cereal (like Cheerios but we actually used a Freedom Foods version) dipped into icing and then into coloured sprinkles. Prepared the day before. 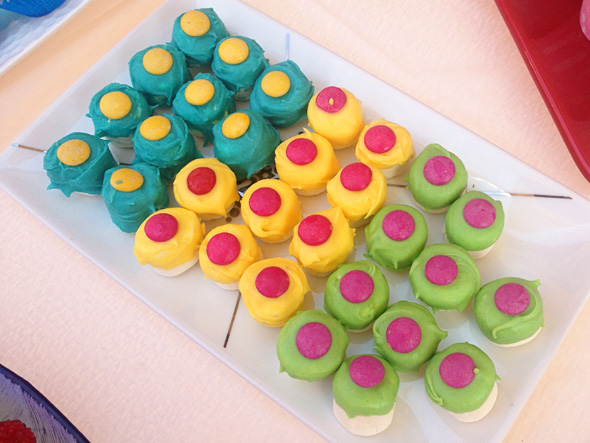 Rainbow marshmellows: melt white chocolate, add in few drops of food colouring. Spear your marshmellow with a fork then dip into chocolate. Place onto plate and add a chocolate button (Smarties, M&Ms). Refrigerate to set. Prepared the day before. 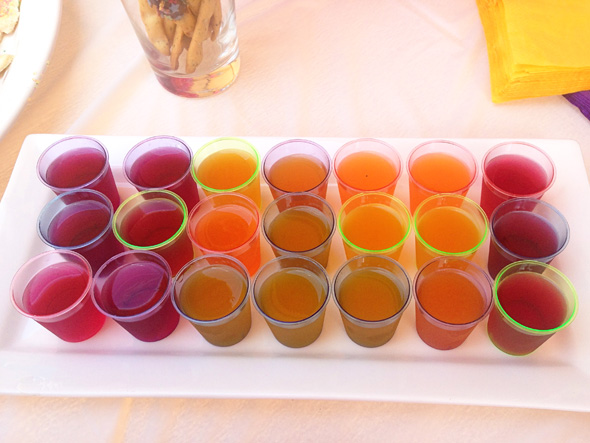 Rainbow Jelly: I was planning to make individual mini serves of jelly in a range of colours and then I found these rainbow coloured, plastic shot glasses which provided an instant colour hit 🙂 As I had already purchased the jelly, I did still make a number of different flavours. Prepared the day before. 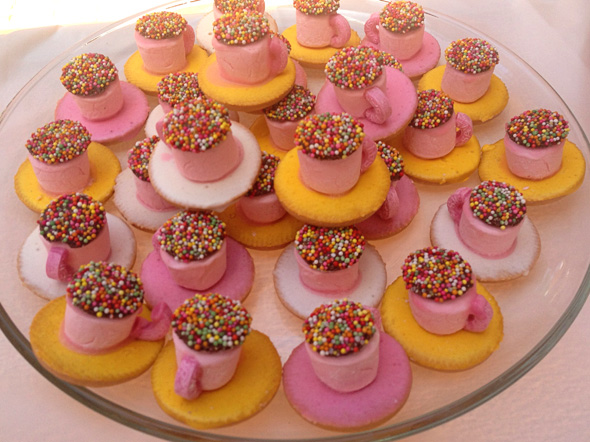 Tea cup biscuits: see a full tutorial at Planning With Kids. Prepared the day before and stored in an airtight container. 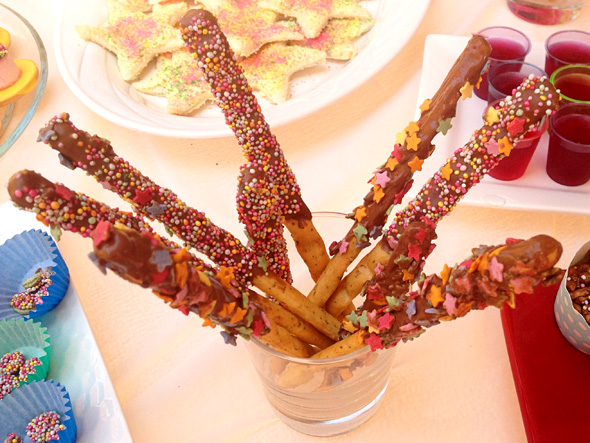 Sprinkle Stick Fairy Wands: see instructions for how to make these over at Danya Banya. Prepared the day before. 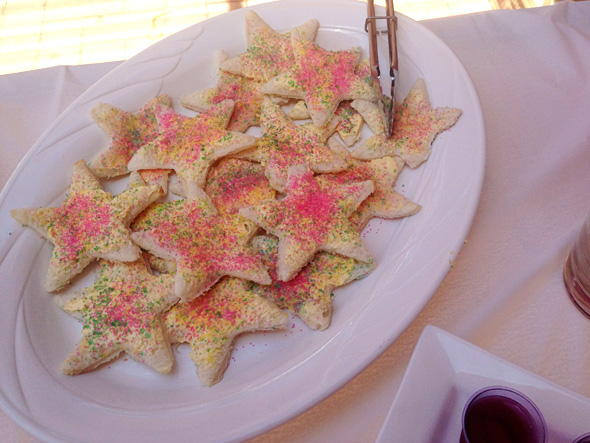 Fairy Sprinkle Bread: made just before the party and cut to shape with my trusty star cookie cutter.

Not individually pictured but all prepared the day before; 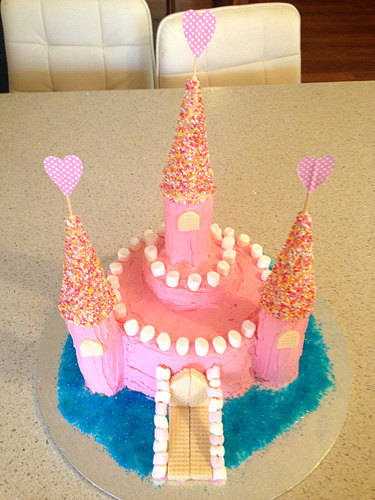 I can tell you how many sleepless nights this cake caused me in the lead up to the party. Immy really wanted a Fairyland castle cake and I somehow committed to making it myself. It actually turned out much better than I could ever have imagined with thanks to the advice of a good friend’s MIL about cake preparation, and these three sources of inspiration – Bondville, Three Lil Princesses, and Paging Fun Mums. 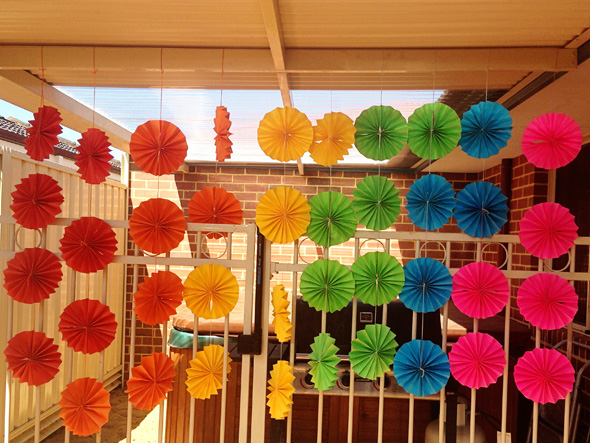 It really helps to have a good friend who loves party planning 🙂 I cannot take any credit for making the marvellous collection of paper fan decorations – I think she made at least 40! They were quite simple to make, each requiring two A4 pieces of paper, and I think they are simply perfect for a rainbow party. 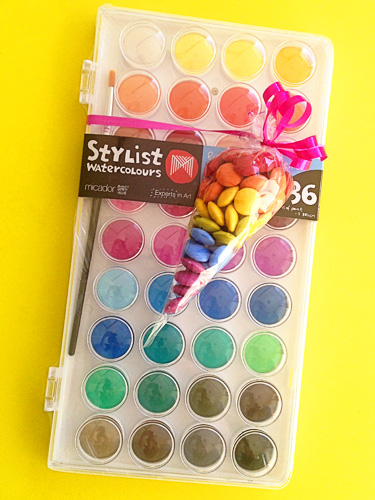 We paired a rainbow watercolour palette with a cellophane cone of rainbow lollies as a thank you to our guests. Our watercolours were supplied by our favourite kid’s art supply company, Micador. 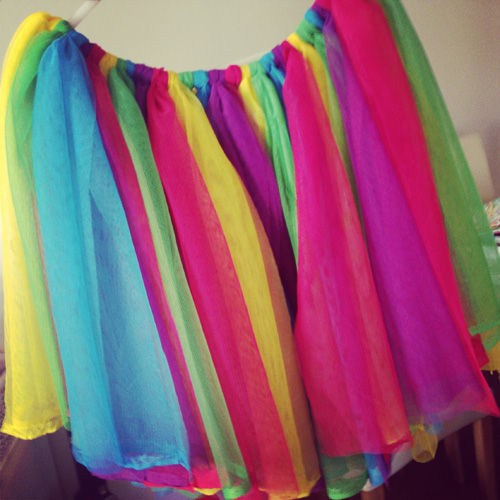 debating which fairy she wanted to dress up as for the party. I breathed a sigh of relief when she settled on Kylie the Carnival Fairy as I knew that it wouldn’t be hard to make a rainbow skirt using lengths of soft tulle and a ring of elastic – no sewing here! We added a yellow singlet top and a headband adorned with colourful ribbons and she was set to party – fairy style, of course!

What has been your child’s favourite birthday party theme? 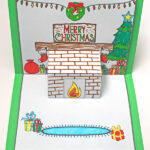 Available as a free printable, this holiday mantlepiece Christmas Pop Up Card … END_OF_DOCUMENT_TOKEN_TO_BE_REPLACED 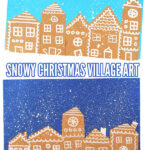 This snowy day Christmas village art project is so much fun! I love the contrast … END_OF_DOCUMENT_TOKEN_TO_BE_REPLACED 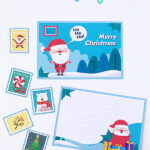