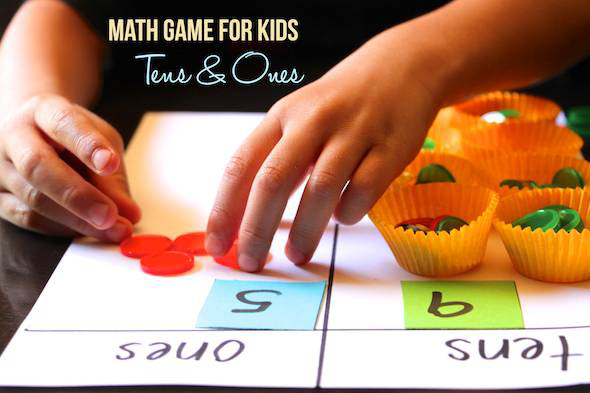 This post is by regular contributor Pauline Soo of Lessons Learnt Journal.

Math games, like this Tens and Ones math game, helps children understand the concept that 1 of these (cupcake liners) is equal to 10 of those (little counters). Over time, they will see ten as a unit made of of ten ones and will be able to use tens as a unit to count. This is a useful mathematical strategy to know, as counting by tens is much quicker than counting by ones.

Math Game for Kids: Tens and Ones

The traditional version of this game uses paddle-pop (popsicle) sticks. You present a huge bundle of pop sticks to the kids and have them bundle them up in groups of ten. We didn’t have any pop sticks in our art cupboard (they are still on my shopping list) so we used our collection of counters and some cupcake liners instead.

I quickly drew up a template on a piece of paper with two columns, with the headings, tens and ones. 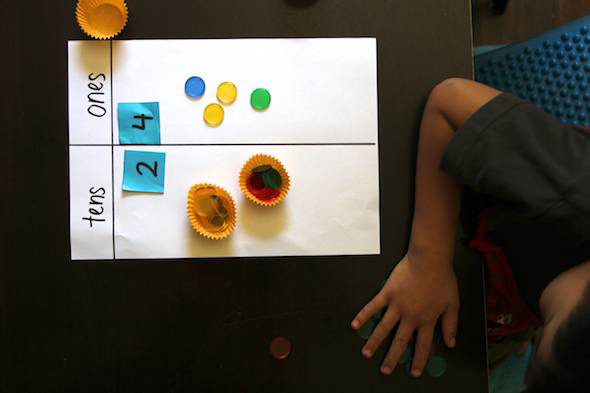 Using some of our numeral cards, I flipped over a combination of two digit numbers. They then had to make up that number using their counters.

What a relief it was to them that they didn’t have to count by 1’s to make those two digit numbers. They could make up the number 95 by placing 9 of those cupcake liners, filled with ten counters each, to make up the ninety; followed by five individual counters in the ones column. 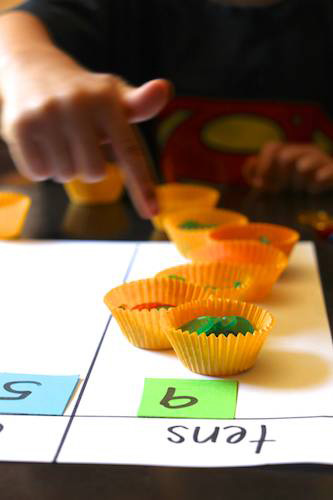 If you’re out of pop sticks like us, here are some other possible materials you could use to make your bundles of 10:

There are probably a thousand other things you could use to create bundles of 10. What are your tried and tested collections of ten?

Pauline is a Christian, Wife, Mother of 4, Primary School Teacher. When not blogging, she may be found virtually hoarding on Pinterest, trying to decide which Instagram filter to apply, or compulsively refreshing her Facebook feed. Most days you'll find her chasing her kids and that much needed nap.

Inside: Our pick of the best YA dystopian books series for teens. If your … END_OF_DOCUMENT_TOKEN_TO_BE_REPLACED

Looking for a range of fun, high energy family games to play at your New Year's … END_OF_DOCUMENT_TOKEN_TO_BE_REPLACED