My 8 year old loves the Harry Potter series! So when she asked for a Hogwarts Harry Potter themed birthday party, I knew it meant just one thing…a party at home! 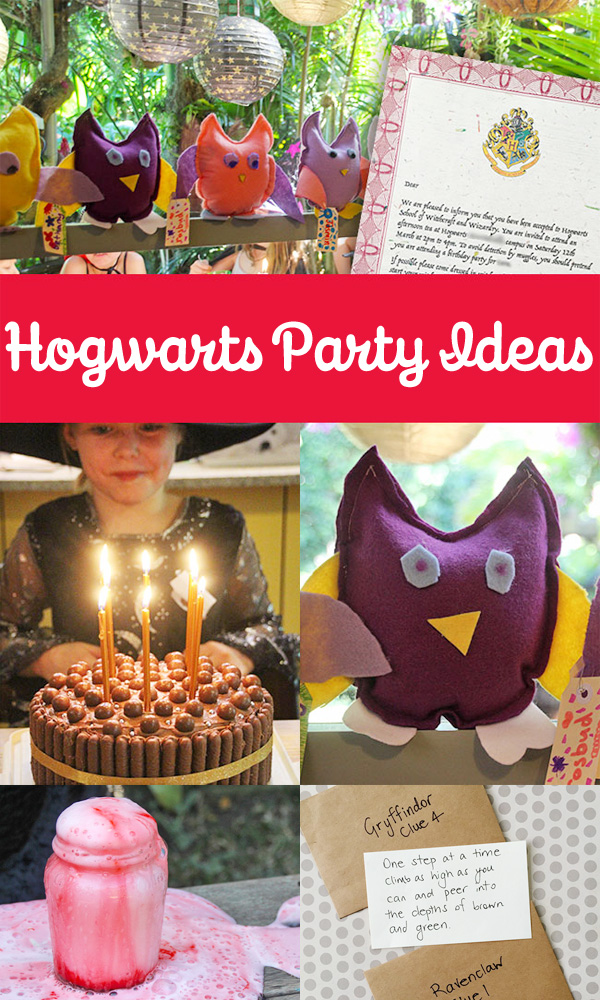 This party was a total hit but there was a fair bit of preparation before the party. The success of the party also hinged on Chris and I taking an active role in the Hogwarts adventure. We both dressed up as Hogwarts professors and channelled our inner teachers which helped the kids to really get into the spirit of the party. It did help that had a strict numbers limit with a maximum of 12 kids, and that the party was a drop off party so there were no spare adults to look after! I even tried to convince our 5 year old to dress up as a house elf in an old pillow case but she flatly refused.

The Invitation
The invitation was an important first step in creating anticipation for the theme of the party. We wanted the kids to feel like they were going on a Hogwarts adventure all of their very own! The invitation itself was printed on a parchment style paper with a fancy red border (that I happened to find languishing at the back of our local newsagent) and sealed with a red stamp on the back. It read:

We are pleased to inform you that you have been accepted to Hogwarts School of Witchcraft and Wizardry. You are invited to attend an afternoon tea at Hogwarts (your suburb) campus on (date) at (time). To avoid detection by muggles, you should pretend you are attending a birthday party for (name of birthday child).

If possible please come dressed in witches’ clothing so that you are ready to start your witchcraft lessons.

Your parents may drop you off via the floo network or muggle transport at (address).

We await your owl no later than (RSVP date), or if your family does not have an owl, you may send word to (your name) via muggle phone on (your phone number).

I received some very amusing text message replies from parents mentioning owls and broomsticks and all things Hogwarts!

The Arrival: Sorting and the Houses
We decided to sort the 12 attendees into 2 houses (Gryffindor and Ravenclaw). As each child arrived at the party we asked them to place a witches hat on their head and perch on a special stool. (Prior to the party, Chris had recorded onto his smartphone two tracks, in a booming voice – a ‘Ravenclaw’ track and a ‘Gryffindor’ track). During the sorting it was Chris’s job to play one of the 2 tracks over our stereo, and ensure we had two equal groups of kids in each house. Once the kids were sorted a house name was pinned to their clothes.

House Competition
We ran a house competition throughout the party. Chris and I allocated points to each house and they were written up on a small whiteboard. This was a hugely popular part of the party. They all cheered whenever someone was given points for their house. We allocated points for sharing, helping others and all sorts of stuff. By the end of the party both houses were (intentionally) on the same number of points. 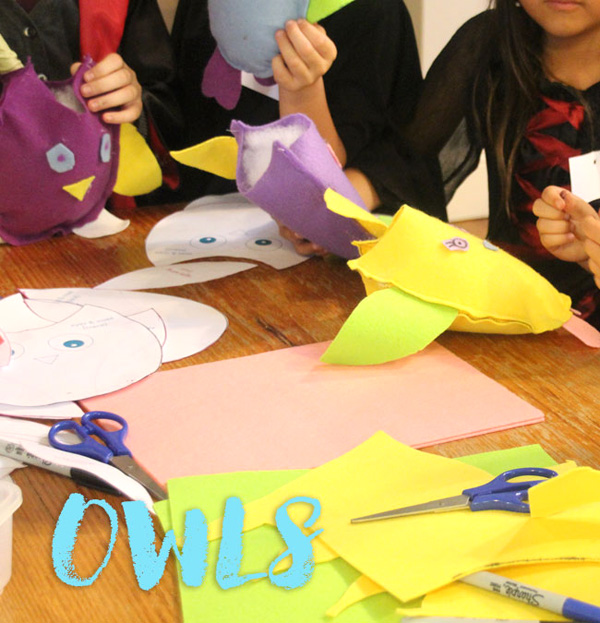 Activity 1: Game Keeping Lesson (Owls)
Our first activity was making owls for our ‘game keeping’ lesson. It took approximately 45 minutes. I did some preparation before the party for this activity. I printed and cut out an owl pattern for each child.

Instructions for during the party

This was quite a production line and I was concerned that it would be completely chaotic…… but thankfully it wasn’t. I had a handful of 8 year old craft masters in the group who took to this activity with gusto. There were only 2 kids who struggled a little and needed my help to cut the felt. My youngest daughter was put on assistant duty. She carried around a basket picking up leftover felt and delivering it to kids who were making their eyes and beaks.

After this activity I served the party food on our outdoor table decorated in black and gold. This gave Chris time to finish off the last of the owls on the sewing machine. 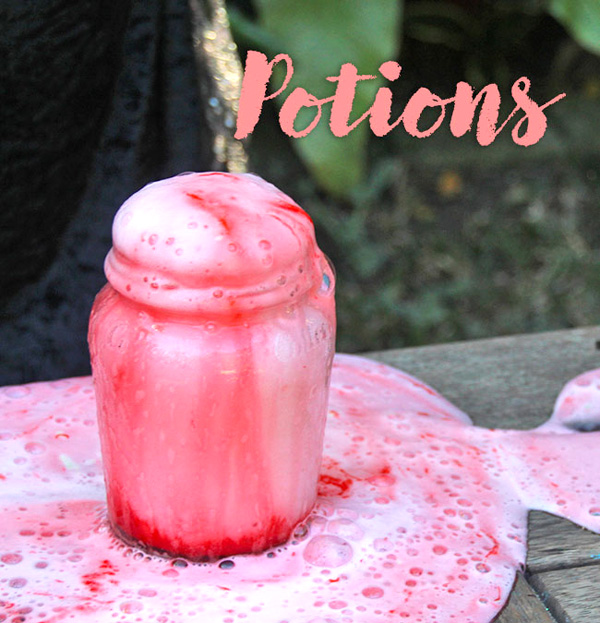 Activity 2: Potions Lesson
I was the teacher in charge of the potions lesson and I pretended to very serious (but not mean like Professor Snape!) We had set out two long benches – one for the Gryffindor kids and one for Ravenclaw kids. On each bench there was a glass jar for each kid. At the bottom of the jar I had placed (prior to the start of the party) a few drops of red food colouring.There were lots of opportunities for allocating house points during this activity.

We wanted to build the anticipation of this activity so we didn’t rush it. The kids stood behind their benches with their jar. They were told to not open their jars until specifically instructed. Amazingly, they were extraordinarily obedient – they really did treat it like a real class!

First, I asked them to open their jars and then I walked down the line of kids with my bowl of diamond dust (bicarb). I asked each child to put a heaped tablespoon of diamond dust into their jar. 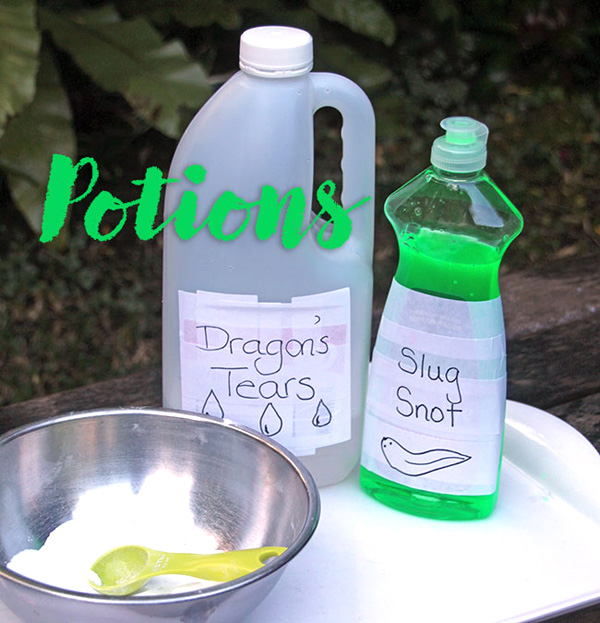 Third, I told all the kids to put the lid on their jar. I then called each kid’s name and they walked to Chris who poured them out a cup of dragon’s tears (white vinegar). They had to return to their jar and wait until everyone had their own cup. To keep it exciting while they were waiting, I told them the story about how Chris had to fight the dragon and tell it a sad story to make it cry tears for this very lesson.

Fourth, I asked all the kids to open their jars and then on my command they were to pour the dragon’s tears into their jar. There were many screams of shock and delight when the mixture foamed down the sides of the jars. Success!

Activity 3: The care of magical creatures
This activity was a treasure hunt. The treasure being two lost unicorns that needed to be ‘saved’. At the end of the potions lesson a letter magically arrived. It said:

Attention children from Gryffindor and Ravenclaw – there are two unicorns who are lost in your area and we need your help to find them. The Forbidden Forest Centaurs have provided clues to help you find them. Please hurry and solve the clues to bring the unicorns back to safety.

Included with this letter were two clues – one for the Gryffindor team and one for the Ravenclaw team. When I wrote the clues I tried to imitate the slightly weird way that centaurs speak in the Harry Potter books. Here are some examples:

One step at a time climb as high as you can and peer into the depths of brown and green (Answer: in our largest tree that has a rope ladder)

Somewhere dark but open to the sky, don’t be scared put your hand inside (Answer: in our fireplace)

I wrote 5 clues for each team. The birthday girl was the head of the Gryffindor team for this activity and her best friend was the head of the Ravenclaw team. I wanted 2 girls who knew the house well so that I could make the clues challenging. They loved this activity – it was the perfect way to run off the sugar they had consumed during the party. Chris and I followed the kids around and helped out when they got stuck. Both teams successfully found their unicorns which were hidden (with permission) in the front yards of our neighbours. 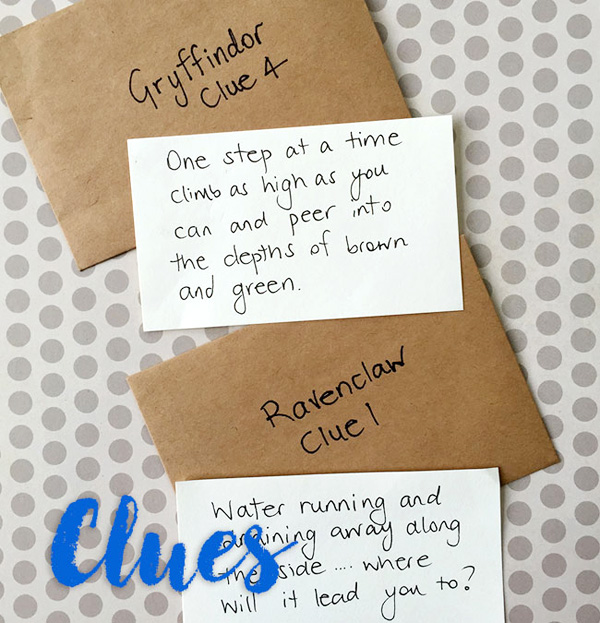 And after that the party was over. Chris and I were thoroughly exhausted. The kids got to take their owl home along with a little signed report card that read: Congratulations, Your have completed your training at Hogwarts School of Witchcraft and Wizardry attached to their party bag.

The party was well worth the effort – it it one of the best birthday parties we have ever held.

And if you love Harry Potter and love crafting, check out The Unofficial Guide to Crafting the World of Harry Potter (aff). 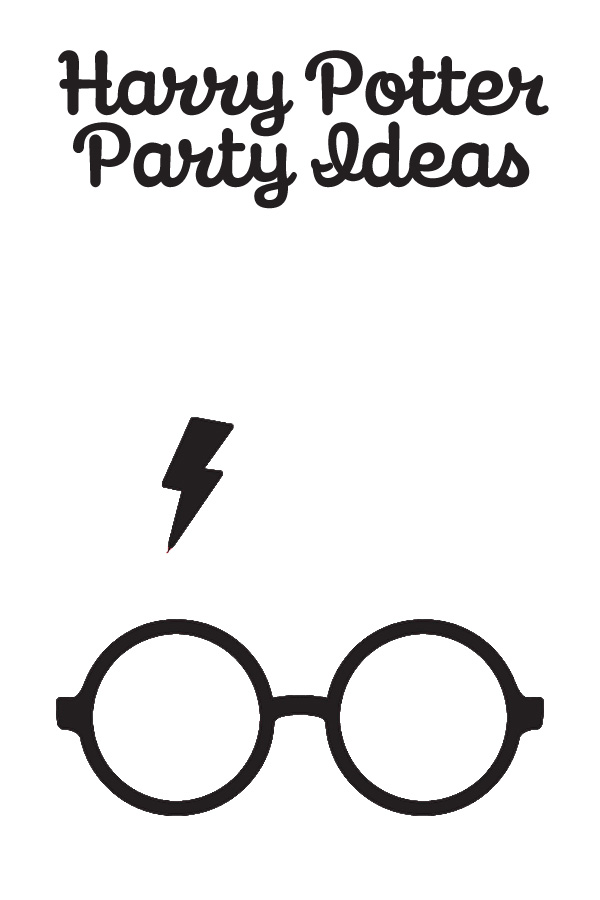 Ali Wright is mum to two young mini makers – their favourite place to be is around the craft table with glitter in their hair. Ali's focus is on process oriented art as she loves watching her kids experiment with creative materials. When not busy with art and craft, you'll likely find them at work and play in their small city garden. As the mini makers love a good mess, their days include lots of water and messy play!

Inside: Our pick of the best YA dystopian books series for teens. If your … END_OF_DOCUMENT_TOKEN_TO_BE_REPLACED

Looking for a range of fun, high energy family games to play at your New Year's … END_OF_DOCUMENT_TOKEN_TO_BE_REPLACED