Immy loves to help with chores. She is clearly not planning on following in my domestically challenged footsteps! Here she is helping to hang the washing, a most favourite past time. 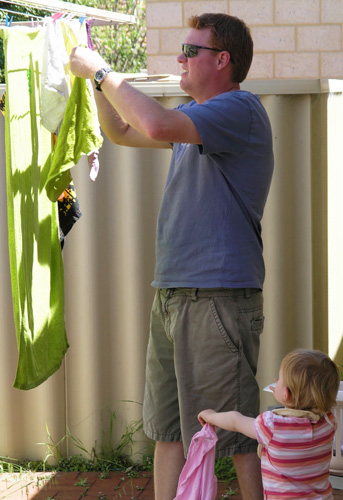 Her other favourite is helping with any form of food preparation or cooking. Previously she would pull a dining table chair over to the kitchen bench and climb up onto it to “help.” For an example, see the photo below where she is assisting in the preparation on brussel sprouts. Yes, that’s right as well as helping with cores, this child also eats brussel sprouts! (see this non-taster post for further explanation). 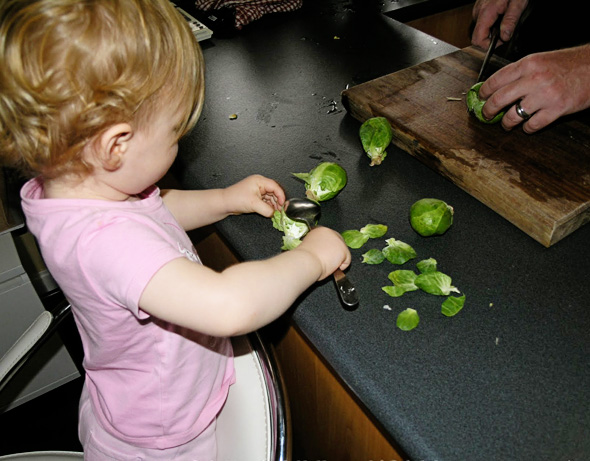 Our dining chairs are not the safest for climbing up or standing on as they have a curved seat and low sides. Before you suggest that we could have offered an outright ‘no’ to standing on the chair, on those few occasions that we tried, we then had to deal with the mysterious HAND that would reach up and over the bench, grabbing at random objects aka Thing from The Addams Family. Much better for her to be up where she can see and be told, “No, children don’t touch knives,” than have her reaching to swipe one off the bench!

Anyway, moving along, I found a solution… drum roll, please! 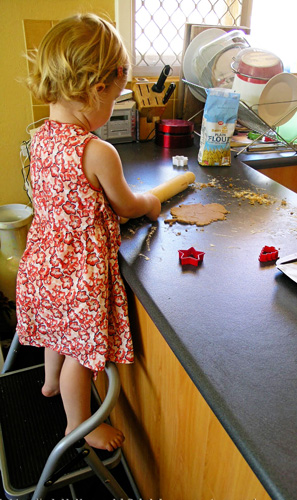 This one cost under $30 at our local hardware store. As well as the two steps it has a good rail that runs up the sides and along the top for Immy to hold onto as she climbs up and down.

Admittedly, Immy is quite confident on her feet (she is now 23 months and has been walking for a year). I would probably not advise this as a solution for a toddler who is not so confident. Immy has actually fallen a couple of times, usually when she is reaching for something she shouldn’t be touching! We watch her closely and remind her to stand still and be careful and I don’t think it is any more of a concern than when she is playing about, climbing on the couch or on our bed.

P.S. In the photo of the stepladder we are making what were meant to be gingerbread shapes for Christmas! My dough assumed the consistency of a dried out cow pat for some bizarre reason, which proceeded to crumble if you even looked at it. However, as Immy had helped me to prepare the dough, we did roll out a small portion with much precariousness for her to cut a few cookies and we baked them. She didn’t seem to mind crumbly gingerbread cookies at all! 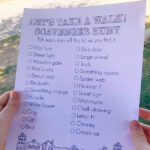 Make the most of neighbourhood walks with this fun, printable family scavenger … END_OF_DOCUMENT_TOKEN_TO_BE_REPLACED

Inside: Get kids reading with this fun printable book bingo activity for … END_OF_DOCUMENT_TOKEN_TO_BE_REPLACED