Activities for Toddlers: Rocks and a Box - Childhood101

In this post regular contributor, Kylie Gardner of Octavia & Vicky, shares a simple invitation to play activity perfect for toddlers. 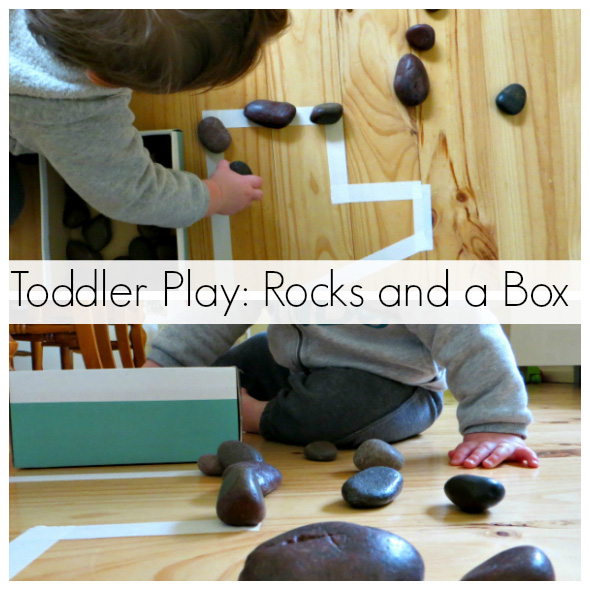 When I think “what are we going to play today?” I always keep in mind the activites that my children are most interested in. That’s my early childhood training kicking in, but also just common sense really! I was thinking about the kinds of activities that Rocky, our 18 month old son, likes and two current favourites came to mind – cardboard boxes and rocks. Rocky had really taken to some rocks I had left over from another project – he loved to hold them in the palm of his hand, move them around on the floor and carry them from one place to another.

I put some masking tape on the floor, placed some rocks in a box and invited Rocky to play. He immediately began to take the rocks out of the box, one at a time, and lined them up on the masking tape. He is so like his sister that way! I remember her doing this at the same age and stage. While he played I verbalised his actions, giving him language for his play. I sometimes used statements, other times I asked questions: “Are you lining up the rocks?” “Where are you going to put that rock?” “It looks like that rock isn’t going to fit there” “That is a big rock.” 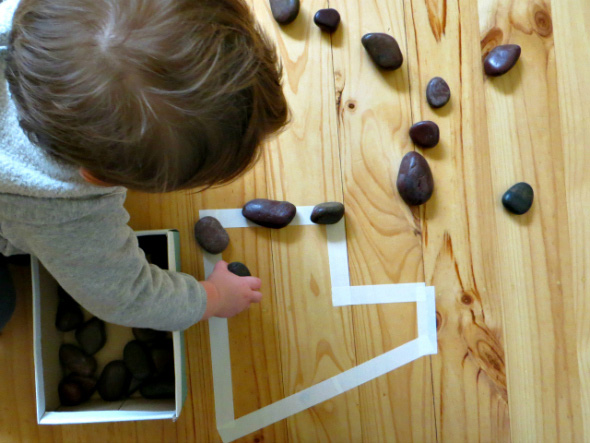 Once he had emptied the box he set to work filling it back up again. He repeated this activity a number of times and then appeared to be getting bored. By bored I mean that he started smashing the box up and throwing things. Rocky is a very physical boy and his behaviour can quickly escalate to SMASH! BANG! CRASH! This was not an appropriate activity for smashing and crashing so I redirected him by cutting some holes in the lid of the box and offering him another invitation to play. Rocky picked up the rocks and pushed them through the holes, then emptied the box and started again. 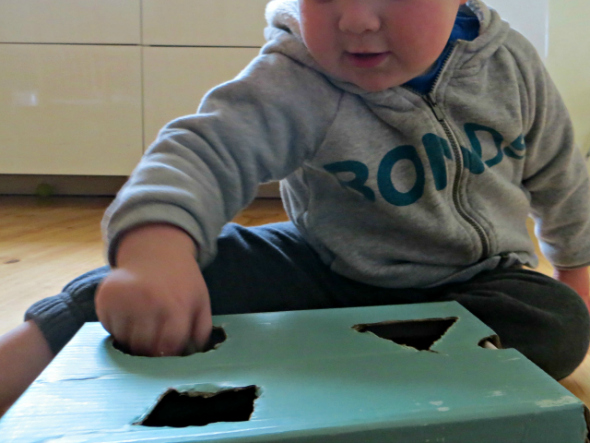 This activity is easy to store for another day, just pop the lid on the box of rocks and put it in the cupboard for a rainy day. It is also the perfect sort of activity for play-beside-me, which I need a lot of with a mountain of teaching planning and work deadlines to attend to! Here’s how you can create this invitation to play at home.

Invitation to Play: Rocks and a Box

Create the invitation to play by;

Some children prefer to have an adult sitting nearby and encouraging them when they start playing with new things. Others need no introduction and will jump right in and get to it. Try both approaches to see which your child prefers. 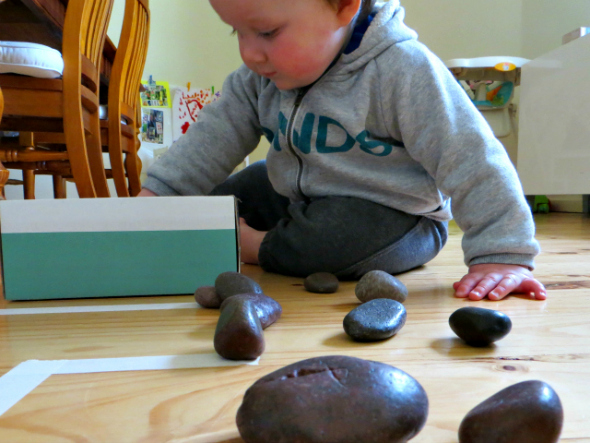 For more toddler play ideas try out this sticky paper play and ball and tube play.

What are your toddler’s favourite ways to play?

Kylie Archer is a technology loving, junior primary school teacher, mother of two. She loves to play, craft and cook with her little girl, using as many geek-tech tools along the way as she can.

Inside: 50 of the best tween and teen books made into movies. Connect your … END_OF_DOCUMENT_TOKEN_TO_BE_REPLACED