As a kid, parties are simply the best. What’s not to love about getting to spend a large portion of the day with your friends, laughing and running around celebrating life! As a parent, planning and hosting your child’s birthday party can feel like an epic responsibility. Which is why I come back, again and again, to the classics! Classic kids party food, classic birthday themes and classic party games for kids.

In my opinion, they’ve all acquired classic status because they’ve stood the test of time, being enjoyed by thousands of children the world over.

Of course, in some parts of the world, your classic birthday party games might look a little different or even be called something else – but wherever you live, your kids are sure to create fabulous childhood memories of joy and fun and laughter with a game or two from this list! 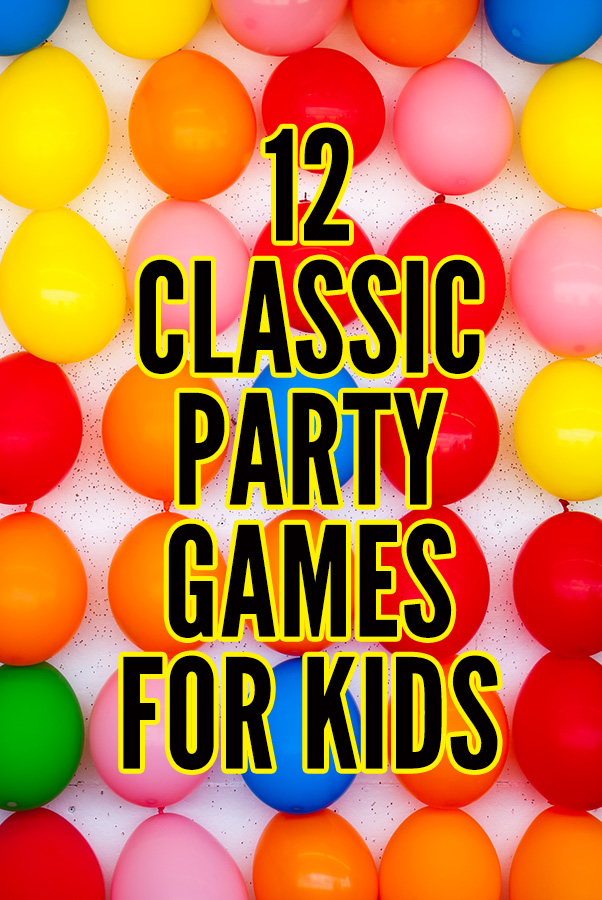 1. Musical Chairs
You know the drill, right? Set up one less chair than the number of children playing. Start the music and everyone walks around the chairs until they hear the music stop, then everyone rushes to grab a chair as quickly as possible. The last person standing it out, another chair is removed, and the music starts again until there is only one final person standing.

2. Pin the Tail on the Donkey
Pop a donkey poster up on the wall (you can order one like this online), blindfold players one at a time and spin each one in a circle a few times before letting them try to stick the donkey tail as close as possible to its rump!

Of course, it doesn’t have to be a tail or a donkey! We’ve improvised to suit the themes of our birthday parties with pin the wand to the fairy, pin the beard on the dwarf and pin the tail on the mermaid. Feel free to get creative to suit your birthday party theme.

3. Pass the Parcel
Okay so this one takes a little preparation but it’s such a huge hit with younger children that I had to include it on our list. Before the party, purchase a small, inexpensive prize related to the party theme or just something that you know your child and her friends will love and then wrap it in lots of layers of paper – recycled wrapping paper or newspaper are great. You’ll want at least one layer per child. To play, have the children sit in a circle, passing the wrapped parcel around the circle while you play some fun music. When the music stops, the child holding the parcel removes the outer layer of paper. Start the music again and continue until one child unwraps the final layer of paper to reveal their prize.

You might like to put a small lolly/sweet or balloon in each layer of wrap so that each of the children receive a prize.

4. Egg Toss
Unless you are very brave, hard boil the eggs beforehand (though I must admit, it’s much funnier if your eggs aren’t boiled – especially for tweens and teens), you’ll need one egg per pair.

Pair players up and have them toss an egg back and forth to each other. Each time the children both catch it, they must take a step backward and continue. The team that can catch their egg with the furthest distance between them, wins!

5. Egg and Spoon Race
Line players up, each with an egg balanced on a tablespoon. On “go,” players race to the predetermined finish line. If their egg drops, they must stop and put it back on their spoon before proceeding further (or, if you’re really tough, send them back to the start each time it drops!)

Again, hard boil your eggs before hand for a cleaner finish! 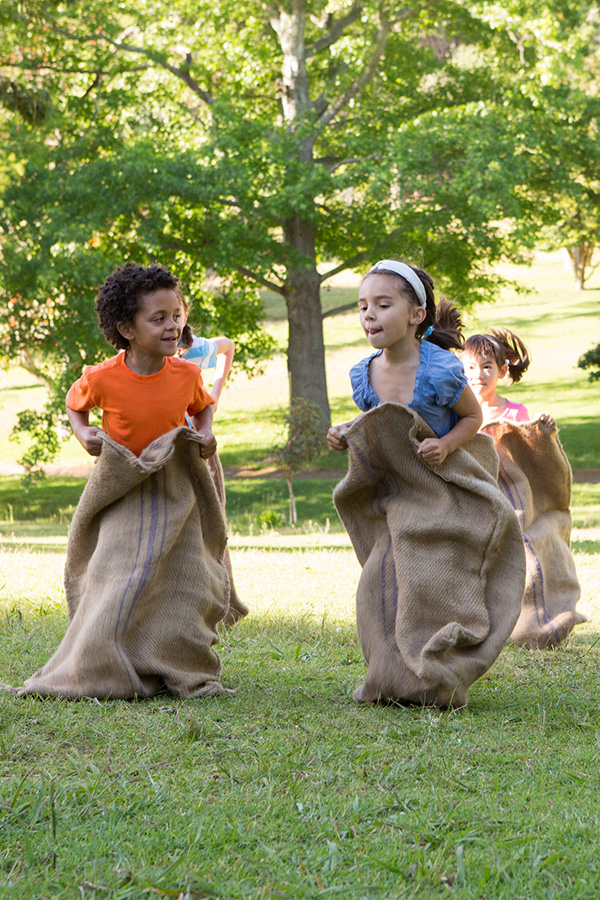 6. Sack Race
For a sack race you will need a hessian/burlap sack or a large pillowcase for each player (you can also play in relay teams to minimise the number of sacks you need). To race, guests must stand with their feet inside the sack and on ‘go’ race to the finish line (or to their teammate if you’re playing relay style). The first player to cross the finish line or first team to have all members jump is the winner.

7. Treasure Hunt
Treasure hunts (or scavenger hunts) can be super simple to set up, or as involved and detailed as you wish. To keep it super simple, hide wrapped sweets/lollies around the play space for guests to hunt, each guest keeps what they find. For a treasure hunt that’s a little more involved hide a series of tokens around the play space for guests to find – the child who finds the most wins a prize. The tokens can be anything – small coloured gemstones, printed tokens like the ones we used here for a goblin hunt, painted rocks, etc.

Finally, at the much more involved end of the scale is a treasure hunt with a series of pre-written clues that guests must read and solve (as a group) in a trail around the party space to find a hidden treasure.

9. Duck, Duck, Goose
A total classic, right? Totally simple, too. Have your partygoers sit in a circle cross-legged. Select one be the “goose.” The goose stands up and walks around the cirle of children, tapping (gently!) each of the other players on the head. Each time the “goose” taps a head, he or she says “duck.” When they decide on the person they want to chase them, they tap that person’s head saying “goose” and then start off running. If they can make it all the way around the circle, back to the seat of the person that just hopped up and sit down, then they are no longer the “goose.” The person who failed to catch them becomes the new goose. If they are caught, they sit in the centre of the circle and miss being selected for further turns.

10. Balloon Relay Race
Running and balloons is always a good idea when it comes to classic party games. Divide your guests into relay teams of four players, two on each side of the play space. You can play a balloon relay in a number of different ways – our favourite requires players to place an inflated balloon between their knees and jumping across the play space. Other versions require players to choose their own way of travelling across the space with the balloon but no hands allowed! This can be fun when played in pairs – each pair has to travel across the space with a balloon squashed between heads, backs or bellies! Alternatively, you can give each player an inflated balloon, have them race to the other side of the yard and sit on a chair and pop their balloon before racing back and tagging the next person in line. The first team to get this completed from start to finish wins! 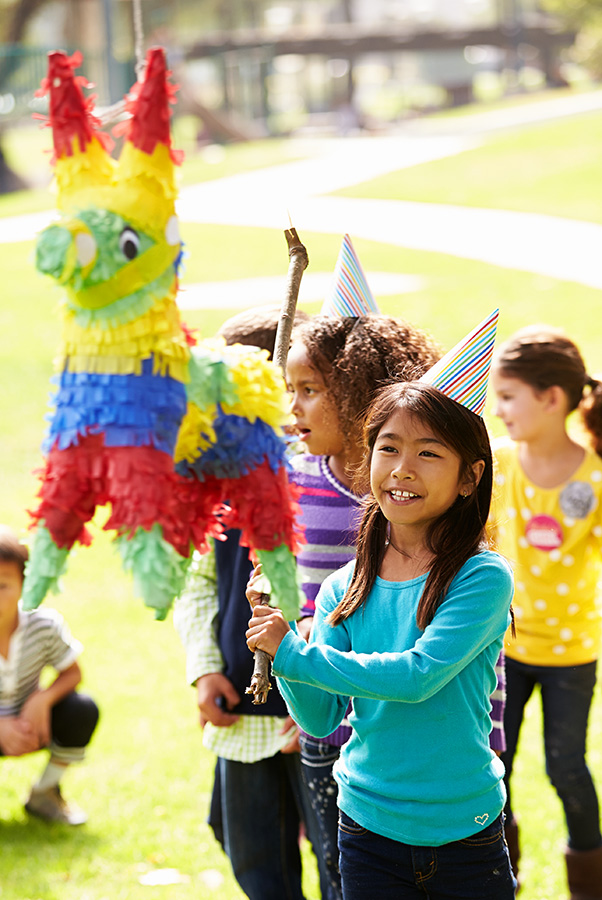 11. Pinata
Before party day you’ll need to purchase or make a piñata to match your party theme and fill it with treats.

Hang the piñata so that it is hanging at about head height. Have party goers stand in a line a few metres away. Traditionally, players are blindfolded and gently spun around three times before trying to hit the piñata with a wooden stick but nowadays players simply take turns hitting the piñata (without a blindfold) until it breaks open.

12. Limbo
Two adults hold either end of a broomstick (or similar) loosely, at stomach height. The children take turns going under the stick without touching it, bending their knees and leaning back as necessary. The stick is lowered after all of the children have filed under it. Anyone who falls, touches the ground with their hands or touches the stick is out.

For a fun twist, Limbo is especially awesome on rollerskates. A great party game for kids at a roller disco!

Looking for even more inspiration? Check out our complete Kids Party Games collection for group game ideas to suit kids of all ages – whatever the occasion. 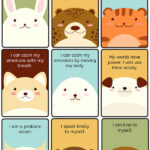 There is no doubting that the way we speak to, and about, ourselves directly … END_OF_DOCUMENT_TOKEN_TO_BE_REPLACED

Looking for a range of fun, high energy family games to play at your New Year's … END_OF_DOCUMENT_TOKEN_TO_BE_REPLACED 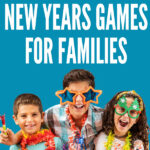