When a collection of carefully chosen loose parts, toys and materials is presented in an inviting way, a young child’s interest will instantly be sparked! This is what we call an invitation to play. My preschooler will often ask me, “Mum what did you put out for me today?” and a play dough based invitation is guaranteed to keep her busy for ages (I also have a 6 month old so that’s a win for me!) 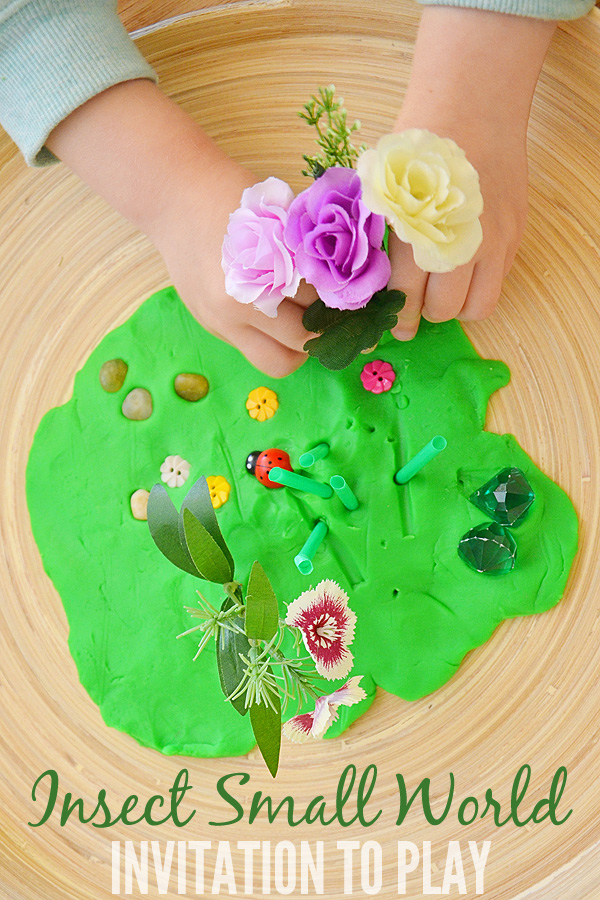 Today’s invitation to play was a small world themed around insects in the garden and this is what I included; 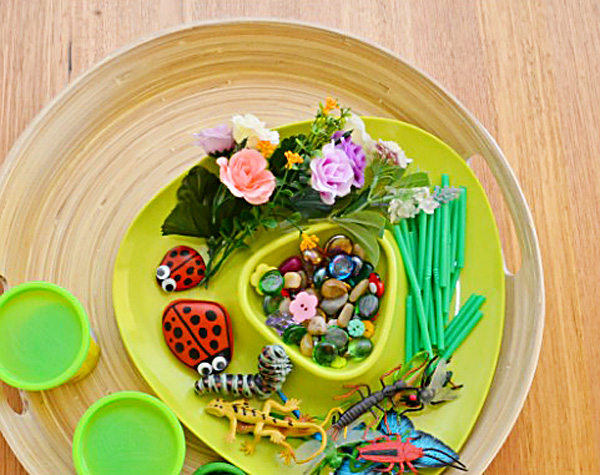 I was in awe of how Miss M’s imagination took off as she played. This is just a glimpse of how her play progressed … 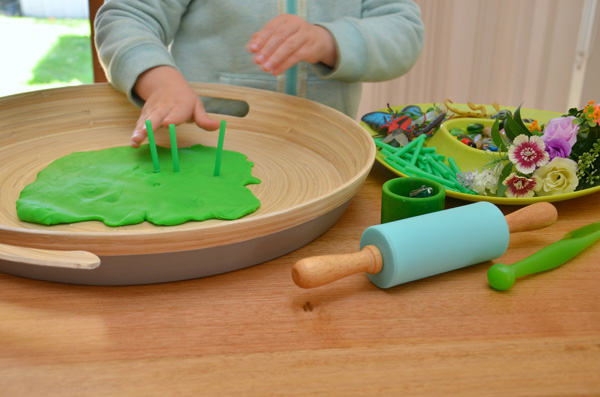 She started off with the straws and said “this is for the long wavy grass”… which then reminded her of the classic story We’re Going on a Bear Hunt.

“It can be whatever you want it to be” I replied.

The gems became pirate’s treasure…and next the scene became a playground. 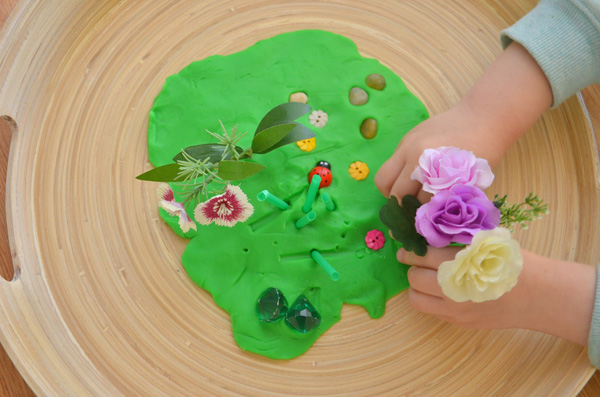 I showed her how she could stand up the flowers by adding extra play dough to support them.
“What else does your garden need?” I asked.
“It isn’t a garden!” I was informed (with threenager attitude)
“What is it?”
“A birthday cake!” she exclaimed (the straws became candles and tiny bits of play dough were the flames). 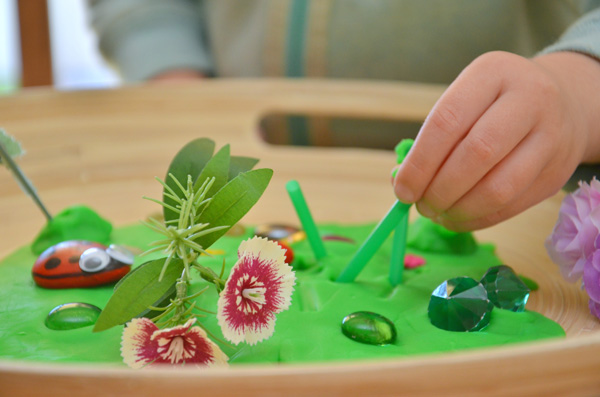 Followed shortly after by; “Shall I go outside and get something for our garden?”
OK, so now we’re back to a garden. Off she goes… and comes back saying, “I’ll show you the ingredients”.
We figured out together than the straws could be used to hold up the flowers found from the garden. 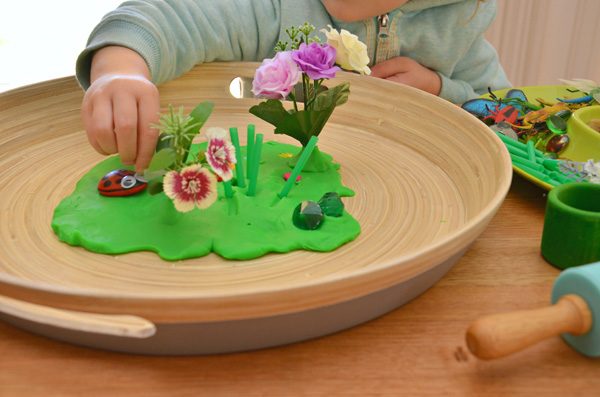 Miss M continued to return to her small world making changes and additions as the afternoon wore on. She made worms, a snowman and all sorts of other fabulously imaginative imaginings. It really goes to show how open-ended activities allow for many play possibilities and opportunities for learning.

You’ll find many other brilliant small world invitation to play ideas right here at Childhood 101, including; 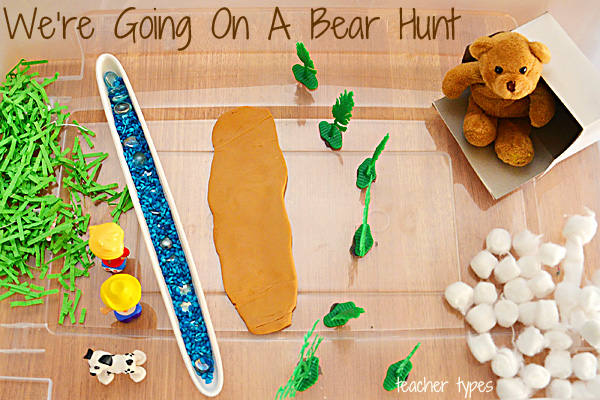 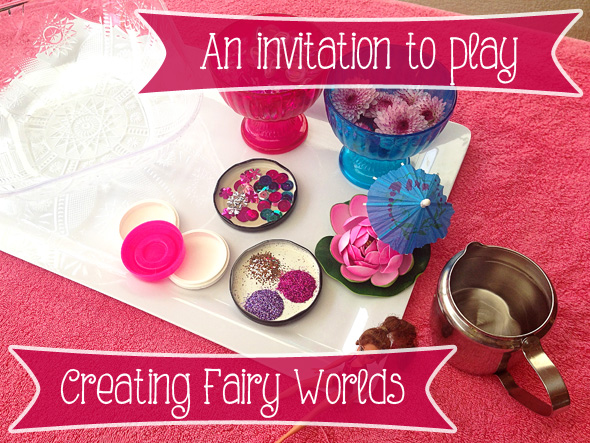 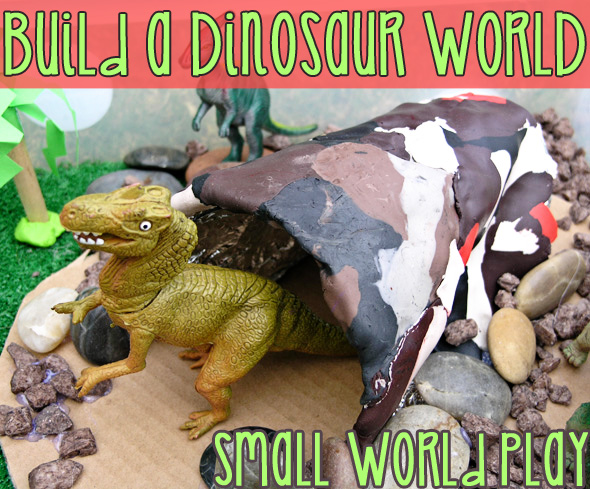 I recently reviewed the Flower play dough kit from small Adelaide based business, Invitation to Play – two teacher/mummies and professional play makers! I was able to reuse some of the materials from this kit to create today’s insect small world.

Lauren Hunt is an Early Childhood Teacher who currently works part time teaching children in their first year of school. She is also mum to a two year old daughter. Lauren is passionate about play-based, hands-on learning and is certainly kept busy by her energetic toddler!

Previous post: Yoga for Kids: Sun Salutation for Kids
Next post: 15 80’s Movies to Watch With Your Tweens & Teens

Inside: This free, printable The Color Monster Emotions Activity is a fabulous … END_OF_DOCUMENT_TOKEN_TO_BE_REPLACED 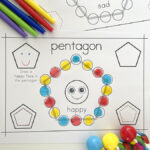 As I write this it is a beautiful, sunny Winter's afternoon. Through the open … END_OF_DOCUMENT_TOKEN_TO_BE_REPLACED