When my eldest was four she fell in love with the original 70’s version of Willy Wonka and the Chocolate Factory and I was excited – it seemed I had birthed a movie lover to follow in my own movie loving footsteps. She loves musicals – just like me, and comedies – just like me, and a good dose of drama – just like me. And now she is eight and a half I am excited to begin introducing her to some of my favourite movies of the 80’s.

The 80’s – that fabulous period of ra-ra skirts, leg warmers, big fringes and video games! And the movies! So many to love!

Here are 15 that are on the list to be shared with our girls as they navigate the tween and teen years. 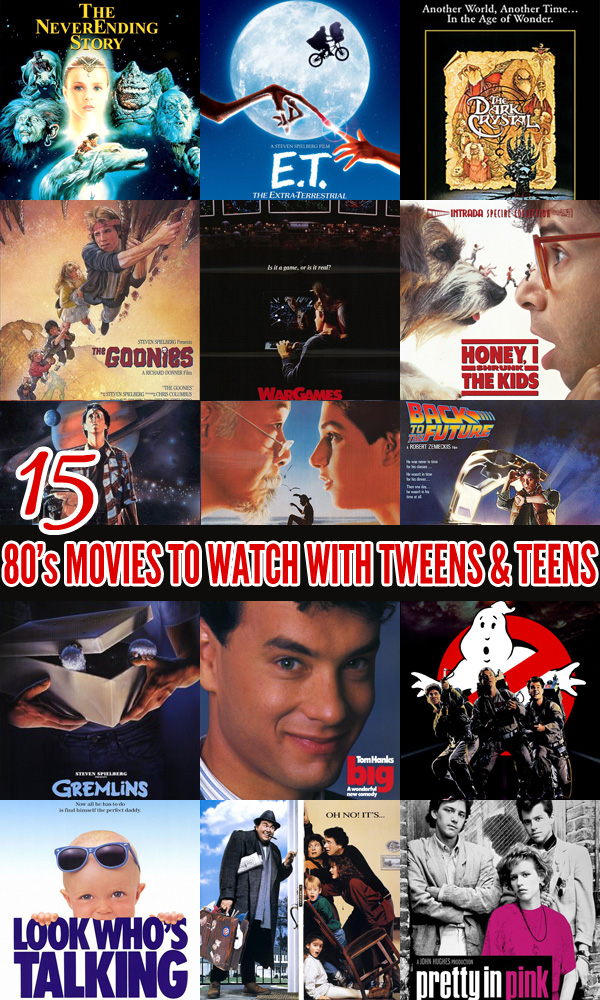 80’s Movies to Watch With Your Tweens & Teens

Many of these movies are recommended for children aged 10+ so I have linked each movie to its Commonsense Media review so you can find out more about the film and decide if it is right for your family.

1. The NeverEnding Story: A young boy escapes his everyday life through the adventures he reads in books. Although warned about the dangers of an ancient book, The NeverEnding Story, he is drawn into it’s magical tale of the land of Fantasia, which desperately needs a hero to save it from destruction.

2. The Dark Crystal: On another planet in the distant past, a Gelfling (believed to be the last of his kind) embarks on a quest to find the missing shard of a magical dark crystal. If he can repair the dark crystal, Jen believes he will bring peace back to their troubled world.

3. Honey, I Shrunk the Kids: I know, it’s the corniest of corny on the entire list but we love it! Four kids are shrunk to the size of ants by a shrinking machine invented by one of their father’s – an eccentric inventor. When they are accidentally put out with the trash they must find their way home across the jungle that is their front yard, filled with hidden dangers.

4. E.T. The Extra Terrestrial: A young boy discovers an extra terrestrial hiding near his home and they develop a extraordinary friendship while trying to find a way to get E.T. back to his alien planet.

5. War Games: A computer whiz kid accidentally connects with a top secret super-computer which has complete control over the U.S. nuclear arsenal. It challenges him to a game between America and Russia, and he innocently starts the countdown to World War 3.

6. The Last Starfighter: After beating the Starfighter video game, a discouraged video-gamer is recruited as a gunner for an alien defense force. He refuses but soon realises he is the galaxy’s last hope to defeat

8. The Goonies: A group of kids find an ancient pirate treasure map that they hope will lead them to the treasure they need to save their town but have to get past a family of mobsters first!

9. Back to the Future: High school student, Marty, is sent thirty years back in time in a time travelling DeLorean invented by his friend and eccentric scientist, Doc Brown. He must work out how to get back to the present time without changing his own family’s destiny.

10. Ghostbusters: The Ghostbusters fight ghosts and ghouls as paranormal sanitation workers. Can they save Dana when she unwillingly becomes the gatekeeper of an alternative dimension, Zuul, who threatens to release hundreds of ghosts into New York City.

11. Gremlins: When Billy disregards the rules for caring for the curious Mogwai he received for Christmas, chaos ensues. Gizmo’s siblings are nasty and when they multiply exponentially it isn’t long before the entire town is under Gremlin attack. A kids first horror flick!

12. Big: A boy who makes a wish at a carnival to be big wakes up the following morning to find that his wish has been granted and his body has grown older overnight. Still the same 13-year-old boy inside, he now must learn to cope in the unfamiliar world of grown-ups.

14. Uncle Buck: A slovenly bachelor is called upon to babysit his nephew and nieces, with hilarious results.

15. Pretty in Pink: A teenage girl from the wrong side of the tracks develops a mutual crush on one of the rich and popular guys at school. Friends on both sides of the relationship disapprove.

Do you have a favourite 80’s movie that you can’t wait to share with your kids?

Inside: Our pick of the best YA dystopian books series for teens. If your … END_OF_DOCUMENT_TOKEN_TO_BE_REPLACED

Looking for a range of fun, high energy family games to play at your New Year's … END_OF_DOCUMENT_TOKEN_TO_BE_REPLACED