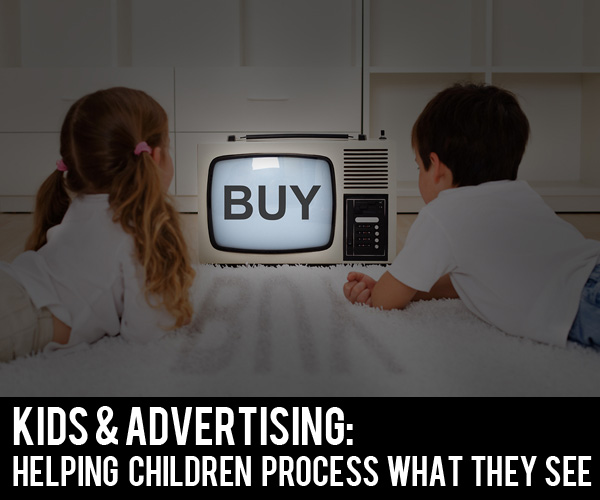 This post is by regular contributor Kate Fairlie of Picklebums.

But I know I cannot stick my head in the sand forever. No matter how much I restrict my kids’ TV viewing to the handful of commercial free stations, I know they will still come in contact with advertising. Advertising is everywhere these days (even on my blog!) and my children need to learn to be critical consumers.

It was a toy sale catalogue that first started our conversation about advertising.

My girls were turning six and were trawling the junk mail making lists of what they wanted for their birthday. They had their eye on a game, a game I thought would sit unused in the cupboard after the first day, but a game they were both desperate to have.

“Do you really want that game? “ I asked them…. Listing off all the reasons I didn’t think it was a good idea.
“Oh but Mum…. It’s sooooo cool! Look at the picture!”
“And Mum look it is on special, and they say it is ‘the best game for girls aged 5-9, that’s us!”

I was tempted to just say a flat no, but in a rare moment of parenting sanity, I decided to discuss it instead.

We talked about how none of those things meant that this game was actually bad but that you needed to think really carefully about it before you bought things and not rush in based on what you read in a catalogue, or hear/see in an ad.

I wasn’t holding much hope that what I said had sunk in, but a few days later the girls came home and told me they had asked a friend who had that game what it was like… “She said it got broken and wasn’t very much fun… we don’t want it anymore, the toy catalogue was wrong.”

I may have done a secret little fist pump right then and there!

Not only did I avoid yet another annoying toy entering our house, but my girls had gone away, thought critically about the product, decided to get a real person’s opinion, and made their own decision.  That’s pretty momentous.

I feel it is important to teach my kids to identify ads, to think about and discuss the messages they are sending us and to seek more information. And the best way I can do that is simply by talking about it. I would suggest;

Advertising is so pervasive in our society and can have a profound effect on our lives. Teaching kids to think critically about advertising is an important life skill that translates well into other areas of life too. It teaches them to evaluate information and helps them to make more informed choices, and not just when it comes to buying toys.

Kate Fairlie is an early childhood educator and Mum of four who lives on a small property, 'The Pickle Farm,' in 'almost rural' Victoria. Kate blogs about all kinds of crazy things - twins, gentle parenting, gardening, trying to be a little self sufficient, activities for kids, a recipe here and anything else that pops up in her crazy life!

Previous post: The Maternity Clothes Conundrum + a Giveaway
Next post: Mum 2 Mum: What Say You About Birthday Party Mayhem

Inside: 21 best illustrated chapter books for 7-12 year olds. Looking for a … END_OF_DOCUMENT_TOKEN_TO_BE_REPLACED

Inside: These free printable make your own Christmas gift tags for kids make a … END_OF_DOCUMENT_TOKEN_TO_BE_REPLACED