(And even then it often doesn’t work out how you might have planned!)

With Immy now at kindy 5 days a fortnight she has been spending much less of her at home time outdoors (though it probably also doesn’t help that it is so hot here at the moment), so I decided to try setting up an outdoor art invitation to entice her outdoors. 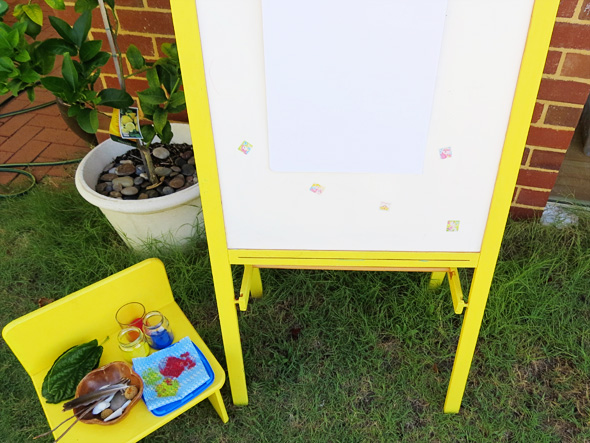 Alongside Immy’s easel I set up three small jars of paint, a sponge with paint and a variety of natural objects that we had recently collected together, thinking that she might like to experiment with painting and printmaking with something other than a paintbrush. 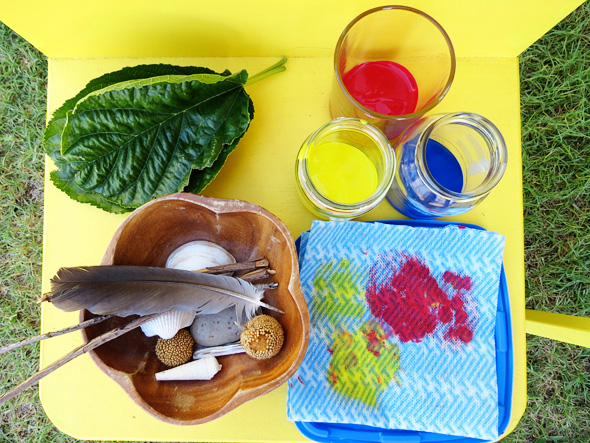 And that is exactly how she started off.  Picking up one object at a time and dipping it into the paint or onto the sponge before pressing it or smearing it onto the paper. Unfortunately, many of our objects made quite small, seemingly unsatisfying imprints and were quickly discarded. 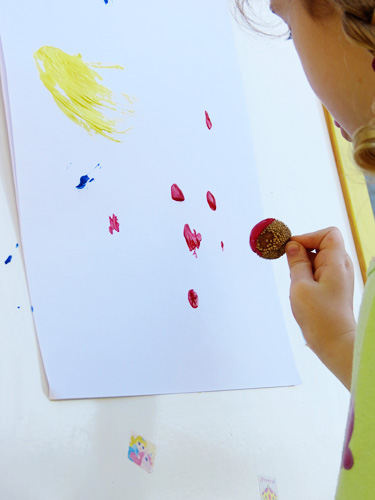 While there were a few interesting moments spend discussing why a shell left a series of dots as an imprint and a reasonable amount of time spent experimenting with the feather as a brush, overall I felt that Immy wasn’t overly fussed with the whole experience.

And then she started dabbing paint onto a new page with the sticks.  All of a sudden she had a whole new burst of energy and before long there was paint flying every which way as dabbing gave way to tapping and then flicking! 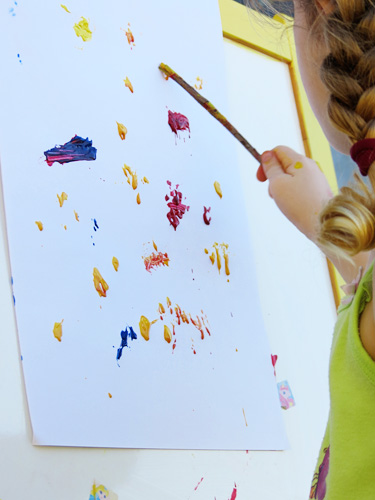 Not exactly what I had envisioned in my head for this experience but I let her go with it.  Before I knew it, there was paint on her face and paint up her arm and a smile on her face.

A good reminder to me that kids art really is about the process… and even then it often doesn’t work out how you might have planned!

I wonder if Jackson Pollock‘s mother ever felt this way? 🙂

Have you recently observed your child take an idea in a whole new direction than you had ever imagined?

Inside: This free, printable The Color Monster Emotions Activity is a fabulous … END_OF_DOCUMENT_TOKEN_TO_BE_REPLACED