This post is by regular contributor Christine Gora of Kids Music Toys.

Today I’m focusing on music for calming, for relaxing and unwinding.

One of the most stressful times for parents can be the arrival of a new baby.  Settling a young bub into any sort of routine can be difficult. Sleep deprivation or lack of good quality sleep is almost universal for new parents but it goes beyond that for many who have difficulty getting children off to sleep or have wakeful nights way beyond the newborn stage and into the terrible twos. Curtain calls or delay tactics are the armour used by many toddlers who wouldn’t have “butter melt in their mouths” on any other issue but have found their winning trump card with mums and dads and getting to sleep.

This is a huge issue and in this post I can only just begin to scratch the surface but I would like to begin with three questions to put the situation in context:

Babies and young children are no different from adults in their needs, except that they are adult dependent and have little personal control over their environment. They are relatively powerless to effect positive change and are dependent on their ability to communicate their needs to you. The environment is something that adults have control over. Let’s look at how music plays a part in this. In a world of constant background noise, sound can be a negative influence if it is not tempered with silence.  The principles of music for calming are:

And these are some practical steps you can take:

What are some tools you can use to aid the calming effect? 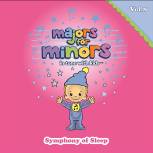 The Majors for Minors Classical Music Series has been developed on the foundation of extensive scientific research demonstrating the indisputable positive effect of certain classical music on the brain development of foetuses, babies, toddlers and young children. You might want to try the settling influences of Symphony of Sleep or Classic Lullabies.  All CDs in this series utilize classical music and are not just simply environmental sound effects.

Patience and a calm manner are essential for success.  Be kind to yourself and try adding a little music for calming to your sleeptime and settling routine.

Have you used music as a way of soothing and settling your little ones for sleep?

Inside: 50 spectacular space books for kids. Our collection of space books … END_OF_DOCUMENT_TOKEN_TO_BE_REPLACED