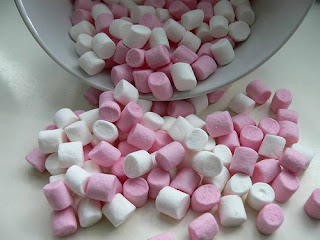 known as ‘gluing’) at the kitchen table with flour/water glue and pictures from catalogues, something she loves to do. The previous day she had enjoyed adding pre-cut craft foam shapes to her painting, so I decided to give her some flowers and circles to add to her gluing masterpiece.

They were gratefully received and I went back to washing the dishes, not more than three metres away. A few minutes later, I turned back to Immy to find her with her hands (and small foam spots) at her mouth. I was alarmed and said, “What are you doing? You can’t eat the spots.”

“No, they are not marshmellows,” I said (in a very stressed, high pitched, what do I do now? voice) as I scooped up all the foam shapes and dumped them out of reach.

“What now?” I thought, unsure if she had actually swallowed any. “Does she need a doctor?” “Will they show up on an xray?” “Do I just wait and see?” All questions that were running through my mind at that split second. She obviously wasn’t choking (a relief) but when I asked her if she ate any, she just said, “Marshm!”

What does a girl do in this type of situation? Sure, I could have called HealthDirect (for those in WA, the number is 1800 022 222 and the line is manned 24 hours a day by qualified nurses) but instead I called my Mum! (Thanks Mum) We talked the options over and I decided to just wait and observe. So far, so good.

Mum is a good person to call as she is no stranger to children and foreign objects. You see, in our family folklore we have a story about a certain two year old (who wishes to remain anonymous), anyway here’s Mum to tell the story…

“I didn’t know anything was wrong until she got a green runny nose, though it was one side of her nose only. I thought it was a cold and so I left it for about 2-3 days until it started to smell.

When that didn’t work, they decided to put her into hospital to see if there really was something up her nose – she still had a thick, green runny nose but only from one nostril.

They had to go up from her throat as they couldn’t find it when they went up her nose, it was very close to actually dropping down her throat into her tummy which would have meant she may have become very sick.

It was a long piece of paper, twisted like a corkscrew! Apparently it smelt so bad when they pulled it out that one of the nurses nearly threw up!”

Children are naturally curious and young children (under the age of three years) often put things in their mouths (or up their noses) as part of their natural exploration or play. Although I keep the obvious hazards out of reach (or accessible under supervision!), I would say that it is pretty much impossible to foresee every single choking and/or swallowing possibility (especially as anything smaller than a D-size battery (and larger than a pea) is considered a risk for babies and toddlers). In preparation for any future incidences, I have searched the web and found the following information from the Children, Youth and Women’s Health Service, Parenting and Child Health (South Australia) particularly helpful;

Signs that a swallowing incidence is an emergency

The narrowest part of the gut is the oesophagus (the tube leading down from the throat to the stomach). If an object passes down into the stomach, it will usually pass through the rest of the gut within a few days (usually less than 4 to 5 days, often within 2 days).

Signs that the object may be stuck include:

Note: A stuck object may not cause any symptoms at first.

What you can do

Inside: 50 spectacular space books for kids. Our collection of space books … END_OF_DOCUMENT_TOKEN_TO_BE_REPLACED