Hands up if you have a child who loves Rainbow Magic

? I swear that we have read at least 120 of the 200+ titles over the past 3+ years, but Immy still loves them. I mean, we even had a Rainbow Magic themed birthday party last year! Yes, I agree they are very repetitive and formulaic, somewhat shallow and excessively sparkly, but if I have to be honest, my child having a love of books and eagerness to read (and be read to) is as important to me as her choice of reading material (though be assured, we actually read a vast range of texts in our house). Recently however, in an effort to move away from the Rainbow Magic collection, I started looking around for other book series’ that Immy might enjoy. The following 7 collections are all series’ of shortish chapter books, with simple vocabulary and illustrations scattered throughout the story. They’re simple enough for children aged (approximately) 7-10 to read on their own, but if your child is anything like mine, they still love them having read to them too! 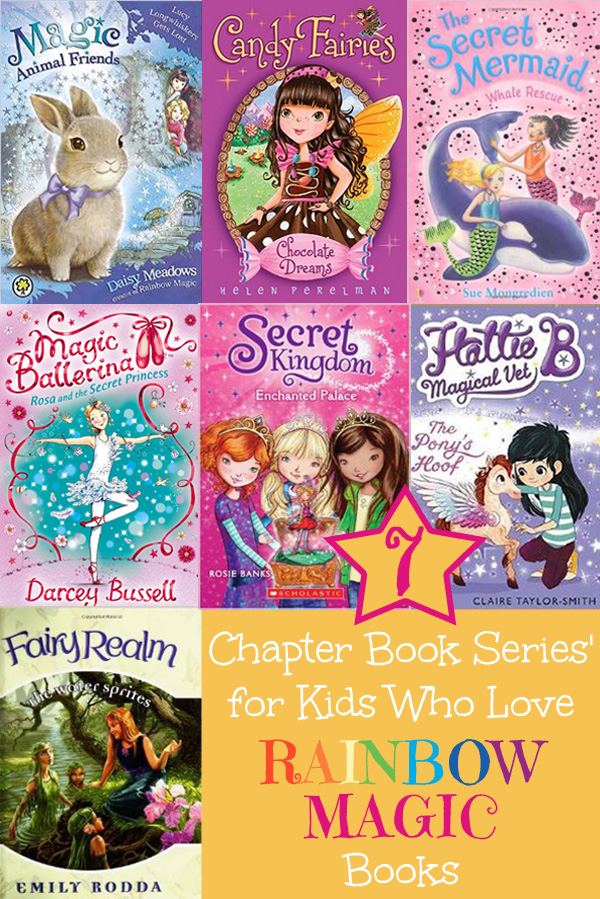 These are all books that we have tried numerous titles from each series, and if you click on the series title you will be taken through to an Amazon link for more information (this is an affiliate link too).

Welcome to Friendship Forest, home of the Magic Animal Fairies! When Jess and Lily follow a mysterious golden cat into the magical Friendship Forest, their adventures truly begin. In each book the girls help their magic animal friends in the forest to outwit the wicked witch Grizelda who is intent on taking over the Friendship Forest for herself and her horrible band of smelly Boggits.

My notes: A nice change from fairies, Immy loves the cute animals featured in this series.

The world of Sugar Valley is very sweet indeed! Each Candy Fairy has a talent related to a different type of candy – there is Cocoa the Chocolate Fairy, Raina the Gummy Fairy and Melli the Caramel Fairy, to name just a few. In each book one fairy faces a personal challenge related to her talent (which she solves with the help of her candy fairy friends), many of which are created or exacerbated by the sour old troll, Mogo.

My notes: Short, sweet and fun but a little too sweet at times for this mummy!

The Secret Mermaid by Sue Mongredien

Molly receives a pretty shell necklace from her Gran and is amazed to discover it is enchanted – by night she transforms into the secret mermaid. Molly enjoys a series of adventures in the Undersea Kingdom, helping Queen Luna, Princess Silva, the mermaids and an array of sea creatures to overcome the wicked plans of the Dark Queen, who will do anything to take control of the Undersea Kingdom.

My notes: Think Rainbow Magic underwater and with a tail 😉

Prima ballerina and star dancing judge, Darcey Bussell, created this series of magical ballet adventures. In each book, a student ballerina is whisked away to Enchantia, a faraway world full of magic, music and dancing where the characters from the most beautiful ballets live together. The citizens of Enchantia generally all live in harmony, at least until the evil King Rat threatens the peace!

My notes: Featuring a different famous ballet in each book, we are enjoying relating the story to what we know about each ballet – especially since Immy saw her first, grown up ballet last year.

Ellie, Summer, and Jasmine are the very best of friends. One day they find a magical box that whisks them away to the Secret Kingdom, a world full of every wonderfully magical thing under the sun. In each book the girls help King Merry and the Royal Pixie, Trixi, to overcome the cunning plans of the King’s sister, Queen Malice, to make everyone in the Secret Kingdom as miserable as she is!

My notes: This is Immy’s current favourite series!

On her tenth birthday, Hattie B is swept into the magical Kingdom of Bellua where she discovers that she has inherited the title of Guardian to the creatures of Bellua from her Uncle, the Magical Vet before her. Unfortunately the evil King Ivar of the Imps is determined to steal the magical talents of the creatures who reside in Bellua and as Guardian, Hattie is charged with finding cures to the ailments that befall each creature (unicorns, dragons, mermaids and more) as a result of King Ivar’s mischief.

My notes: We are looking forward to the release of the next book in this series. The veterinarian storyline is just that bit different to many of the series’ on this list and each book we’ve read also creates discussion about the values of friendship, together which make them a little more interesting then some of the others on the list.

The Fairy Realm by Emily Rodda

Jessie is amazed when she discovers a secret door in her grandmother’s garden – leading to the magical world of the Realm. All kinds of magical beings live in the Realm, and a noble Queen in a great golden palace rules them all. But everything in this magic kingdom is not as idyllic as it first seems, the Realm is in danger and Jessie must outwit an evil enemy to save it before it is all destroyed.

My notes: This is probably our overall favourite series on this list. It is much less formulaic than the others, with more detailed characters and storylines. Immy also listens to the audio story versions over and over again.

Does your 6-10 year old have a favourite chapter book series?

Inside: 50 spectacular space books for kids. Our collection of space books … END_OF_DOCUMENT_TOKEN_TO_BE_REPLACED