This post is by regular contributor Catherine Oehlman aka SquiggleMum.

Good educators are always asking themselves questions about what makes kids’ minds tick.  Over the years I have asked myself many questions about the differences between girls and boys, and been intrigued by the nature vs nurture debate.  My opinion on the issue has changed several times as I have taught children of different ages, in different countries, and now have a young pigeon-pair of my own.  I have asked questions like these:

Some of these questions I’ve come to a conclusion about, while others still puzzle me.  As I watch my own children play, I learn so much about the way they think and the way they learn. 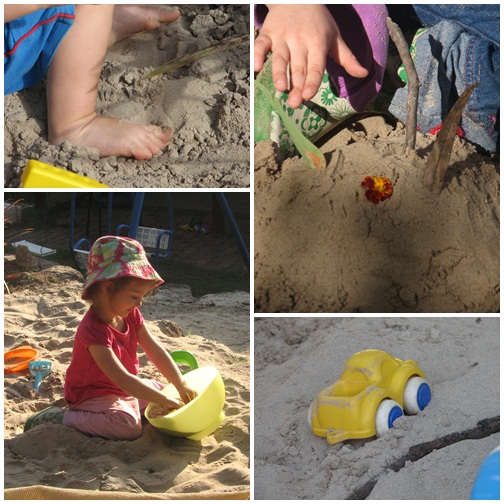 I’ve spent plenty of time playing with both of my kids in the sandpit.  We have built castles together. We have used planks of wood to make roads.  We have created exploding volcanoes with bicarb soda and vinegar. We have dug tunnels. We have written our names in the sand. We have taken photos of sand art. We have buried our feet.  But just recently I watched my husband playing in the sandpit with our two year old son, and I looked on in amazement as my boys did things together I have never done!

They dug out an area of sand, smoothing the bottom to make a floor.  Then they used the planks of wood to line the floor, build walls, and add a flat roof.  Once they were sure it was secure, they covered the roof back over with sand to create an underground bunker!  The Little People moved in, freely driving their vehicles in and out of their secret underground bunker.  Very cool. 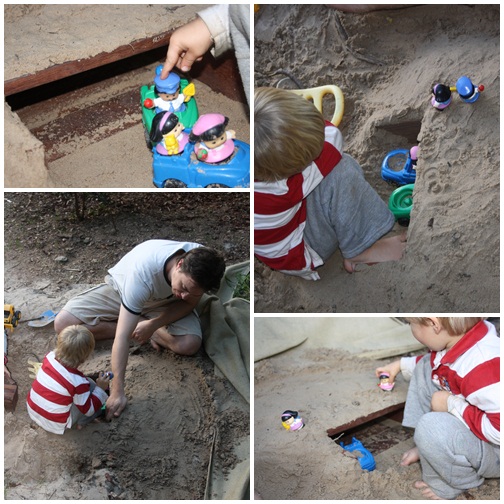 It was fascinating to watch them work.  I saw the way my son’s hands copied his Dad’s.  I listened to the way their conversation flowed.  Father and son were so focused, so engrossed in the task.  I learned so much from their interactions in the sand.

I still have many questions about the differences between boys and girls, but I am convinced that there are differences.  My husband and son think in a way that is foreign to me.  As I seek to understand the way they work, I know that it can only help me to become a better mother to my son, wife to my husband, and teacher in general.

What do you think? Do you have any questions or comments about the differences between boys and girls?  Do you have a story to share?

Catherine Oehlman (aka SquiggleMum) is a mother, teacher, writer, picture book lover, outdoor play advocate, coffee drinker and self confessed bird-nerd.  She still climbs trees and eats fairy bread – with or without her two young kids!  You can find Cath squiggling about topics close to her heart online and in print, or catch her weekly on Brisbane radio.

Inside: 21 best illustrated chapter books for 7-12 year olds. Looking for a … END_OF_DOCUMENT_TOKEN_TO_BE_REPLACED

Inside: These free printable make your own Christmas gift tags for kids make a … END_OF_DOCUMENT_TOKEN_TO_BE_REPLACED 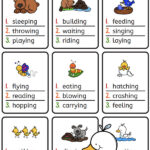