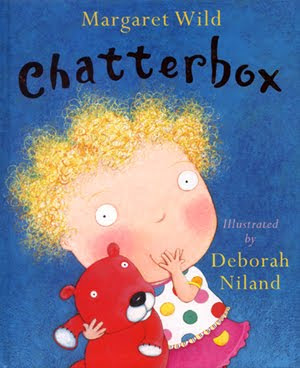 I don’t know if you have ever come across Margaret Wild’s book, Chatterbox, but it is a lovely story about Daisy the baby who will not say a word. The family try everything to coax her into talking but she won’t. Then one day, Daisy opens her mouth …and out comes a stream of sentences and questions about the world and everything in it, much to her family’s complete surprise! 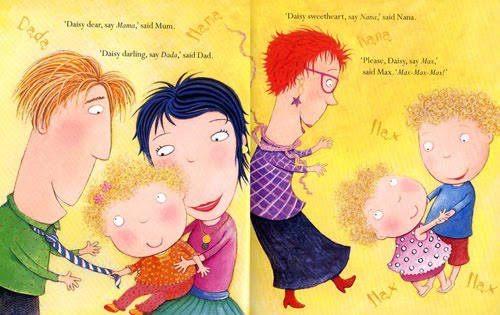 I feel that we are having a similar experience with Immy. By 17 months, I was starting to worry that Immy was a little slow to communicate verbally. Whilst she was clearly understanding everything said to her (often understanding way too much!) and communicating her intentions wonderfully non-verbally, using gestures, facial expressions and a little signing, she appeared to have little interest in or need to talk very much.

As a baby, she did all the ‘normal’ pre-talking type noise-making stuff that a baby is meant to do, babbling away to herself or in ‘conversation’ with you. She was even clearly making cute ‘mama’ sounds at 9 months, much to Dada’s disgust!

By 12 months she was irregularly saying ‘Dadda,’ ‘Mumma,’ ‘boo’ and ‘bye’ but was much more interested in two key sounds, ‘Brooooommmm,’ for anything remotely vehicle related and ‘Miaow,’ for her favourite animal (cars, motorbikes and cats continue to be her favourite things in the world!) She also included plenty of toddler gobbledygook to herself while playing, with lots of varying tones and pitch.

By 18 months she had accumulated 12 words that she used regularly but didn’t show much interest in learning any new ones.

And then all of a sudden, at 19 months she has started adding new words by the dozen and trying to repeat all sorts of words that she hears. It’s like someone flipped a switch and now I have a Chatterbox in the making!

I know that like all things to do with development, the age at which toddlers begin to use recognisable words varies greatly. It was by sitting down and looking at my notes about her progress over time and comparing my little notations to current information about speech development that I felt assured that she was still within the typical range of development.

I try to take a few moments at least once a month (usually on her birth date) to write down Immy’s latest milestones including what she sorts of things she is doing, toys and games she likes, words she signs and says, foods she likes, and any new experiences (like our recent visit to the Royal Show). I find this information great for looking back over as it is amazing how quickly you forget what your baby did and when (probably due to the regular sleep disturbances I am guessing!) Keeping a little notebook with this information is definitely something I would suggest all new Mums doing.

For those who are interested, this is some of the current information about speech development that I found useful;

The most intensive period of speech and language development for humans is during the first three years of life, a period when the brain is developing and maturing. These skills appear to develop best in a world that is rich with sounds, sights, and consistent exposure to the speech and language of others.

There is increasing evidence suggesting that there are “critical periods” for speech and language development in infants and young children. This means that the developing brain is best able to absorb a language, any language, during this period. The ability to learn a language will be more difficult, and perhaps less efficient or effective, if these critical periods are allowed to pass without early exposure to a language.

Milestones in Speech and Language, National Institute of Health, Maryland.

There’s more variation at this time in language development than in any other area. While some develop language skills at a steady rate, others seem to master words in an uneven manner.

Milestones in Speech and Language, National Institute of Health, Maryland.

Somewhere around 18 months, most children have a surge in their vocabulary – what researchers call a ‘word spurt’ – where they begin learning new words at a rate of one or two a day.

It’s reassuring to know that Immy is within the normal range of development. I am sure it won’t be long before I am complaining that she talks too much and that I never get any quiet! I just hope she is not one of those children who is incessantly asking, ‘WHY?’

Inside: Our pick of the best YA dystopian books series for teens. If your … END_OF_DOCUMENT_TOKEN_TO_BE_REPLACED

Looking for a range of fun, high energy family games to play at your New Year's … END_OF_DOCUMENT_TOKEN_TO_BE_REPLACED