Science or magic? A fun density experiment for kids.

This density experiment is very neat. To kids, it appears more than a little magical but the effect is all science – no magic involved! The experiment involves forming a density tower using a combination of different liquids that form layers one atop another due to the differences in their density. Check the explanation below the experiment procedure for more about information about how and why it works. 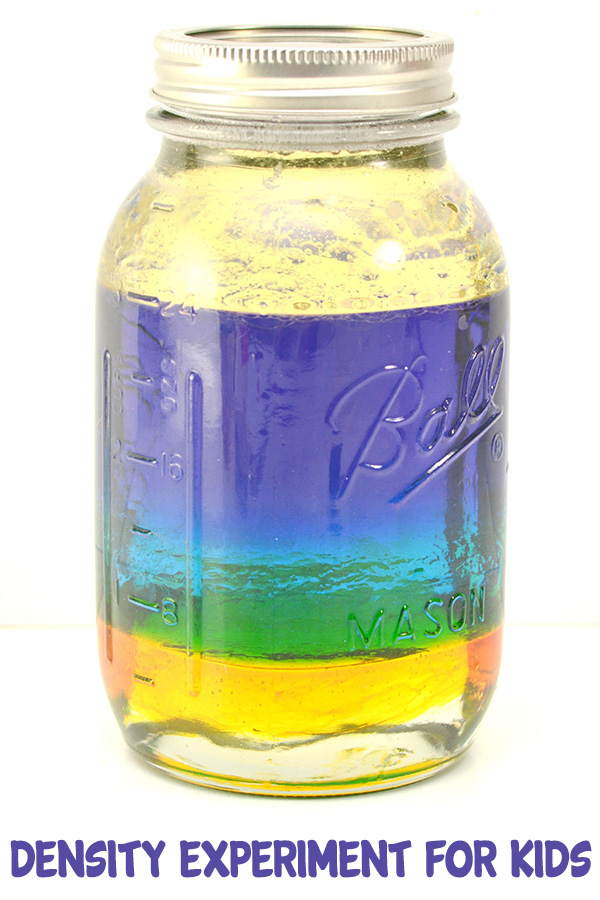 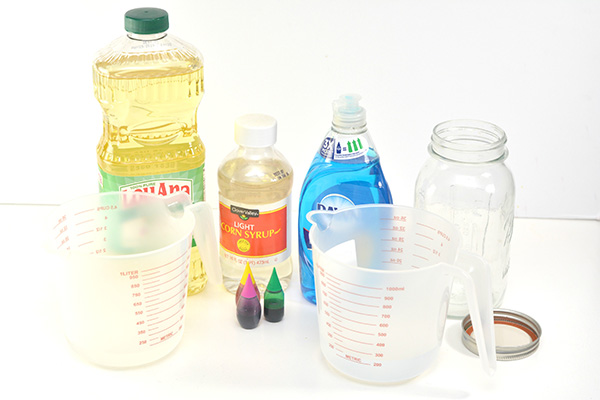 How to Build Your Density Tower:

1. Begin by pouring the light corn syrup into the bottom of the jar. The layer should be about an inch tall. 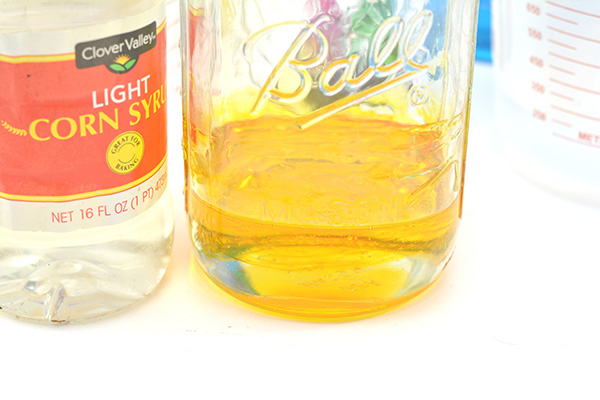 3. Next, pour the dish soap into the jar to layer on top of the oil.

4. Mix a few drops of blue food coloring into some water and pour it into the jar. This will form your third layer.

5. Add a few drops of food coloring to your clear vodka or other alcoholic spirit. We used purple but you may want to use a different color if you want there to be a drastic difference between your layers. Pour the alcohol into the jar to create the fourth layer. 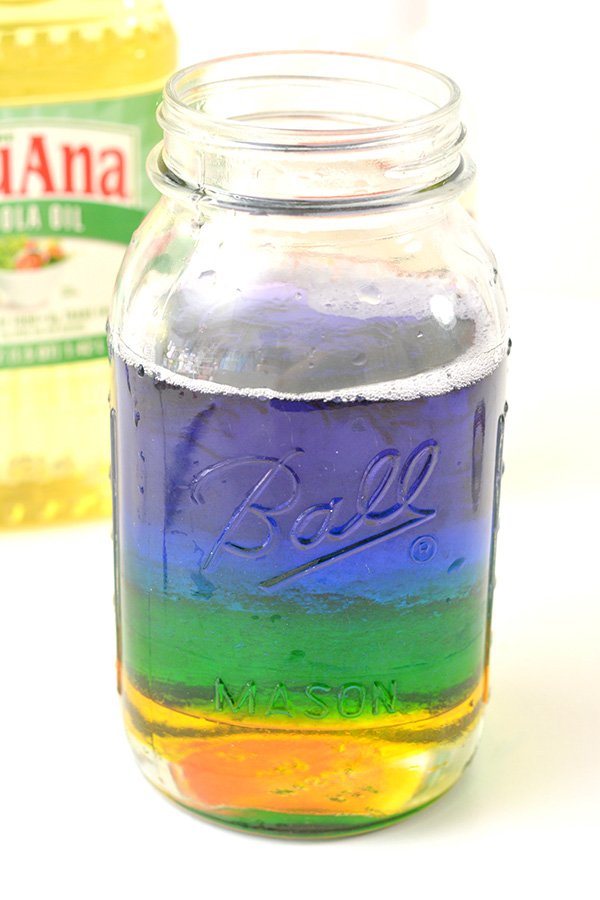 6. Top off the density tower with canola oil. You can color this with food coloring too if you wish. 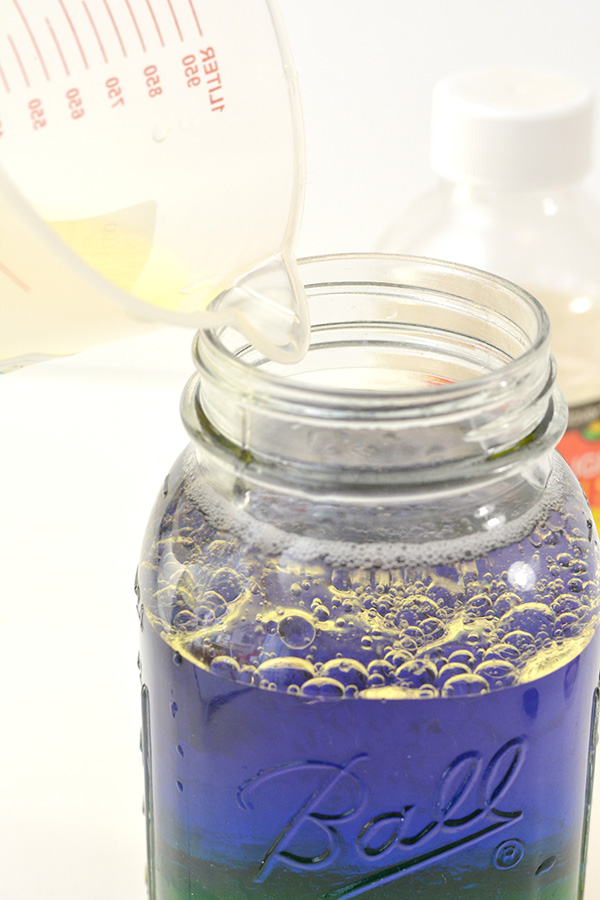 7. Place a lid tightly on the jar, so that none of the contents will leak out. 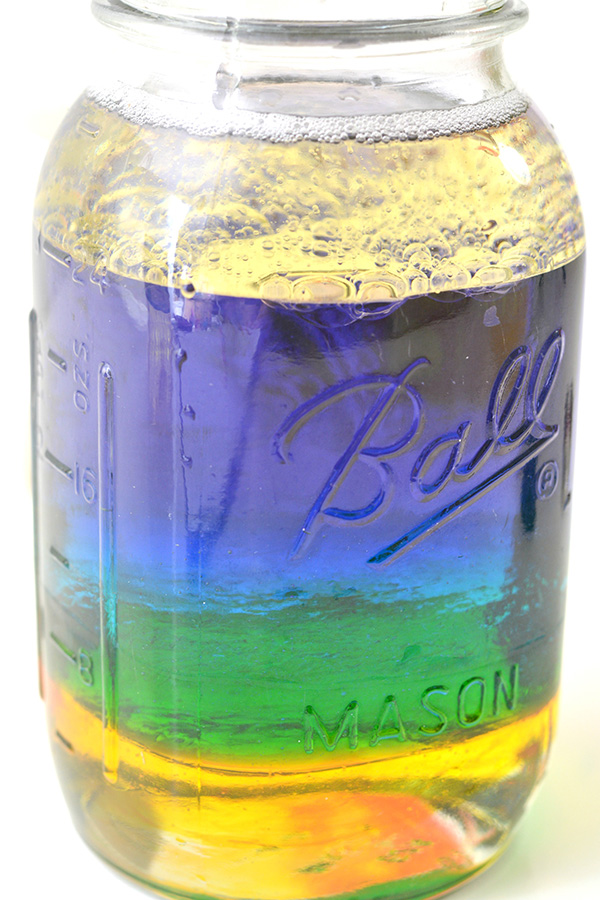 8. Let kids have fun tipping the jar upside down and on its side, and then watch as the layers of the tower separate themselves once the jar has been placed face up again on a flat surface. Do not shake the jar, as this may cause some of the layers to combine. 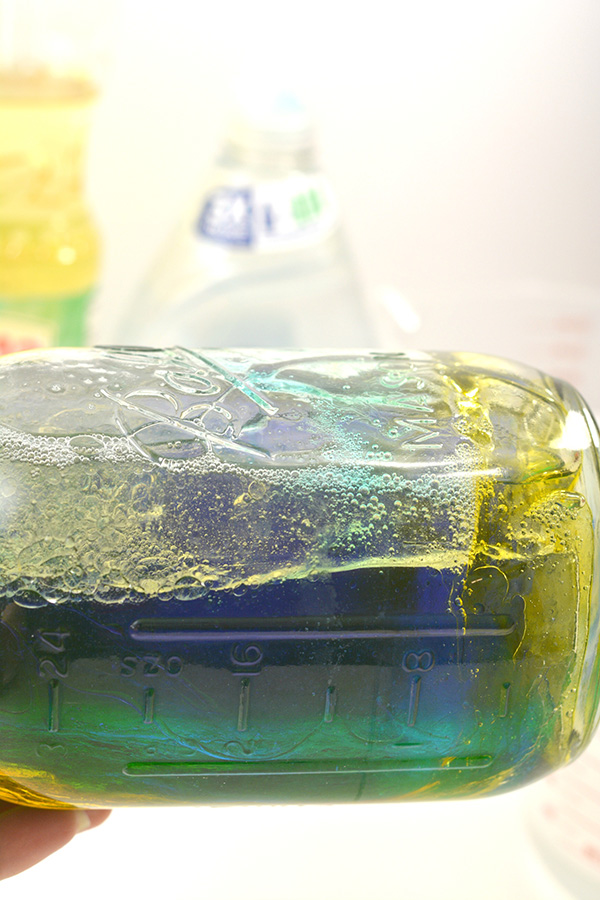 How Do Density Towers Work?

An object’s density is calculated by dividing its mass (weight) by its volume (the amount of space it occupies). Liquids have density too. This experiment uses several different types of liquid to determine which is more dense. Lighter liquids are less dense than heavier liquids so they float on top of them.

For a density tower to work you also need to use the right types of liquids – those in neighbouring layers must be immiscible -that is, they do not mix. Learn more about this in our Oil and Water Experiment. 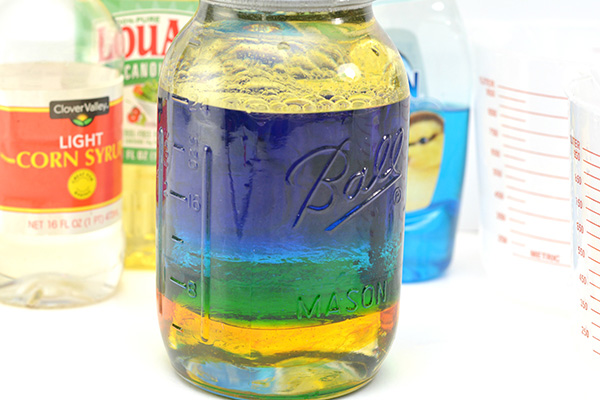 For more cool density experiments, check out Science Bob’s Density Tower You Can Drink and the Sugar Straw Experiment in our fun Kaleidoscope: Colour Activities ebook.

Inside: 21 best illustrated chapter books for 7-12 year olds. Looking for a … END_OF_DOCUMENT_TOKEN_TO_BE_REPLACED

Inside: These free printable make your own Christmas gift tags for kids make a … END_OF_DOCUMENT_TOKEN_TO_BE_REPLACED