On Saturday I was inspired by the diverse group of volunteers I met at my local Westfield’s Give Ability Day event at Carousel. It was a fun day, with cookies being decorated, faces being painted and bright yellow Give Ability Day balloons bobbing along in the hands of smiley-faced children, all for a gold coin donation.

And there was this old friend available for purchase… 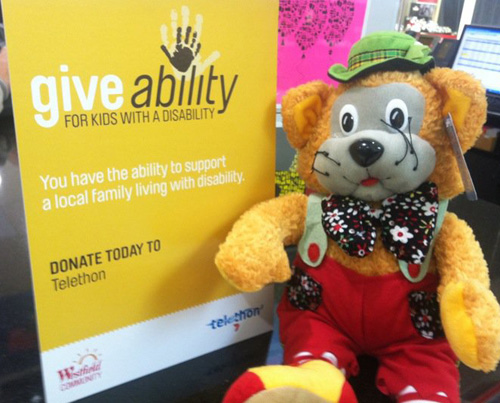 How could I resist? Fat Cat is such an iconic character in Australia. Appearing regularly on his very own show on Australia television for 20 years and saying goodnight to children in my home state of WA for many, many more, Fat Cat is also the mascot for Telethon, the beneficiary of 100% of the proceeds from Give Ability Day in WA. The Telethon Trust distributes funds to over 30 different charity groups, all of which are involved with supporting children (and their families) with disabilities. Operating since 1968, Telethon can only be described as an institution in WA.

But back to the volunteers. I was inspired by the number of (predominantly) young people giving up time on their Saturday to shake a tin as a Telethon volunteer. The Westfield staff were also actively involved – everyone from the Centre Manager (shaking a tin) to the concierge staff (selling balloons) were actively involved in what would have been a very long and very busy day. It really got me thinking about getting back into some form of volunteer community service, something I really haven’t been involved in since I stopped teaching to stay home and be a Mum. Now that Immy is a bit older, I really think that we, as a family, should seek out a volunteer opportunity to give back to our local community.

Do you volunteer, either yourself or as a family, in your local community? What sorts of activities are you involved in? I would love some suggestions to get us started.

If you are in Western Australia and are interested in volunteering with Telethon to help raise funds for children in our community, you can find more information about being involved in a broad range of events here. If you missed Give Ability Day this time, keep an eye out for other Give Ability events at your local Westfield Shopping Centre, it sounds like they have some great future activities planned.

Previous post: We Play: Let’s Play Together
Next post: No One Will Play With Me: Helping Your Child Make Friends

Inside: 50 spectacular space books for kids. Our collection of space books … END_OF_DOCUMENT_TOKEN_TO_BE_REPLACED