What’s the most popular toy at your house? Our is definitely blocks. My four year old son Jack builds with blocks everyday, many times a day. He’ll build bridges and houses and whole cities.

It wasn’t always this way though. For almost a year the blocks sat in a basket ignored, in favour of any and all other toys. I really loved blocks though and wanted so much for Jack to love them too. I loved the potential of blocks; the open-ended play, the problem-solving, the design and creativity, the potential for deep imaginative play.

Then one day Jack asked where Daddy worked,

Daddy works in an office building.

Here was my opportunity. Would you like to build one with some blocks? YES! 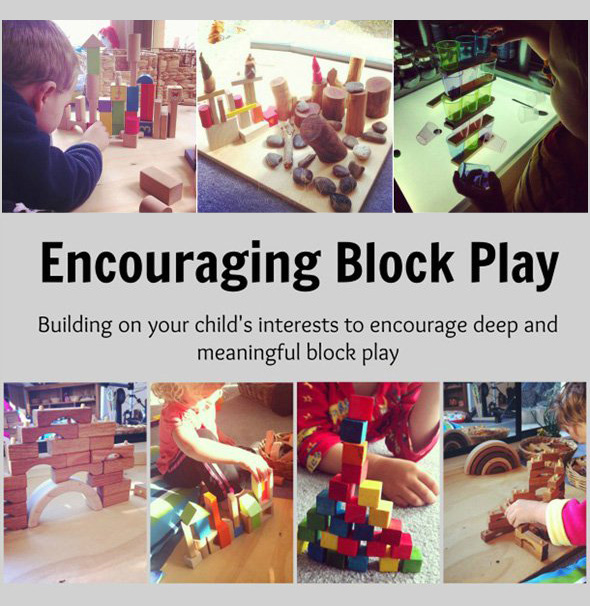 Jack’s buildings were very basic at first, just a few blocks stacked on top of each other but he was so interested in office buildings that he built and built. This was the key. He now had an interest and a material which helped him explore that interest more deeply.

Over the next few months I was so happy to see Jack seeking out blocks. Over the next two years, Jack’s love of blocks has continued to grow.

Throughout that time there have been a few quite deliberate things we have done to encourage and develop Jack’s block play:

Through blocks Jack is expressing his creativity, he’s learning to problem-solve and manage frustrations and he’s learning important concepts of balance, symmetry and design; all the things I had hoped for while the blocks sat ignored in a corner those years ago.

Do your children like to build with blocks? How do you encourage their interest and play?

Kate Gribble is a home-educating mama of two. She taught high school (specialising in Literacy and Special Needs) for nine years before choosing to finish paid-work to be home with her children. After making the decision to homeschool, Kate researched child-led discovery type learning and came across Reggio and Montessori. The beauty, the simplicity and the focus on art and nature had her hooked. In her own time Kate likes to dabble in photography. She is a hopeless but aspiring kitchen gardener and loves a bit of crafty goodness.

Previous post: Creating an Undercover, Outdoor Space for Winter (or Summer) Play
Next post: Tips for Dining Out With Kids

Inside: This free, printable The Color Monster Emotions Activity is a fabulous … END_OF_DOCUMENT_TOKEN_TO_BE_REPLACED