Well, we have landed back home with a thump! Immy and I are both glad to be home. Although being on holidays is great fun, how good is it to sleep in your own bed?!?

Some of the readers of the ‘Toddler Travel Tips: Surviving the Plane?‘ post asked me let them know how we went with our preparations and the actual travel. Let me just say, Immy was a complete star on the plane. She was SO good. For just over five hours she was content and easily entertained.

I think it helped that we had requested seats in the bassinet row. Even though I knew we would not use the bassinet, it provided us with more leg room to generally move around and stretch out and room for Immy to sit on the floor for short periods, if necessary. As it turned out, we were also lucky to not have other passengers sitting in our block of four seats so apart from take off and landing, Immy was able to sit on a seat of her own.

To begin with, Immy fell asleep during the take off breastfeed (that was intended to help with her ears) and slept for nearly the first hour. Then she was happy to have something to eat, which took up a good part of the second hour! (Make sure you remember to order a toddler meal when you book.) Then time for some of the activities which I had packed. 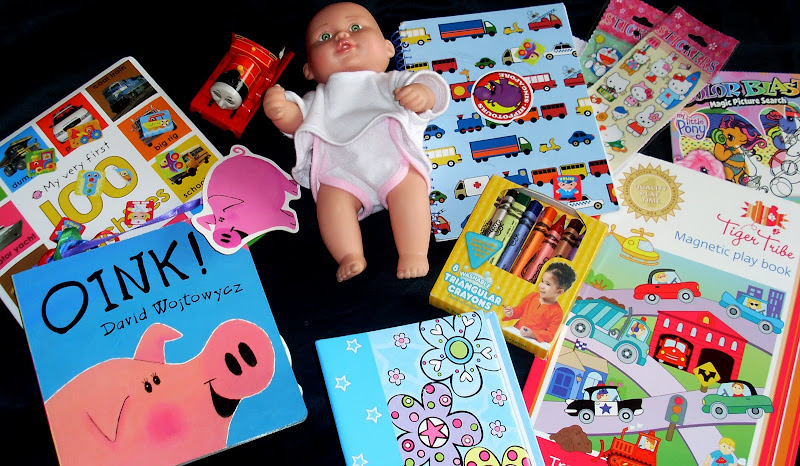 I took two new books. The first, ‘My Very First 100 Machines,’ was a hit as Immy is currently obsessed with motorbikes and cars (one of her new words from Singapore is ‘taxi’!) and the second, ‘Oink!’ is good fun as you must match the animals which are attached via coloured ribbons to their own homes and sounds.

I also made Immy a photo album (just a cheap $2 shop cover) with photos of herself with family and friends or just playing by herself. She hadn’t seen it before and it was a massive hit.

I took a notebook, triangular crayons (to reduce the likelihood of them rolling away) and heaps of stickers. Immy has just discovered stickers and loves peeling them off and sticking them everywhere. Needless to say, her plane tray table was covered with stickers! I had planned to also take a roll of coloured electrical tape as Immy also love to tape things but I left it on the kitchen bench.

Another find that she was captivated by was the Tiger Tribe Magnetic Play Book. Again, I chose the transport themed kit, and Immy loved positioning and re-positioning the vehicles and people all around the base board. Compact and easy to pack, it was a hit with me too!

Dolly, a favourite toy, was great company as she was fed lunch and buckled and unbuckled into her seat belt. The train was a new toy and is a pullback type, so Immy could sit quietly on the floor and play with it or use her on her tray table.

And finally, Mum purchased a magic colouring book to add to our stash for the return flight – I think it is a good idea to keep an item or two up your sleeve for the return journey too.

Add in a couple of episodes of Wiggle & Learn on the inflight entertainment, a few walks up and down the aisles, and before you knew it the flight was over. From now on, I will prioritise booking a flight with the individual entertainment system as it did make a real difference when Immy was tired and could easily have become irritable.

Other advice from readers and around the web which I found invaluable;

Another tip that I forgot to share in the previous post and which I have always done when flying with Immy is spraying her nose with saline spray before each flight. I cannot remember where I read this tip as it was before Immy’s first flight at only nine weeks old but I have always done it and so far Immy has never caught a cold or any other bugs from flying, touch wood!

So, for those readers with upcoming flights with toddlers, good luck! I hope you enjoy a smooth ride.

Inside: Our pick of the best YA dystopian books series for teens. If your … END_OF_DOCUMENT_TOKEN_TO_BE_REPLACED

Looking for a range of fun, high energy family games to play at your New Year's … END_OF_DOCUMENT_TOKEN_TO_BE_REPLACED