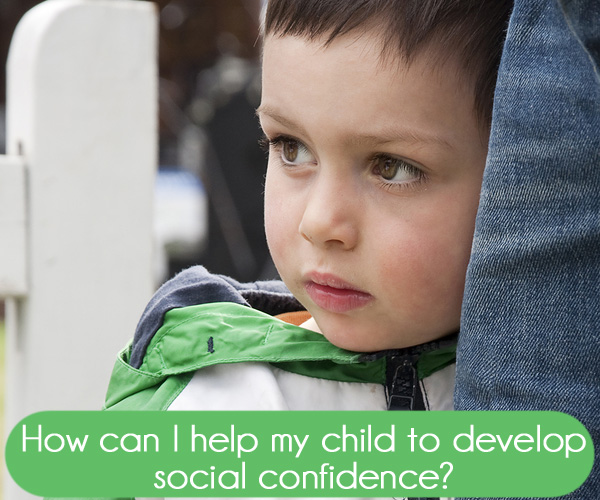 The following question was recently received from a Childhood 101 reader and Mum of two:

I was wondering how parents can encourage social and emotional independence in early childhood? I take both my boys to activities such as Music and Swimming and I have noticed that both do not like to get involved/participate. They are still very young (3 years and 17 months) but I couldn’t help but notice in their group music class this afternoon, that both boys refused to hold hands with other people (adults or kids) when doing Ring a Ring a Rosy. All the other children (same age group) did form the ring but my two sons would only hold my hand – we were the chink in the chain, so to speak! In Swimming class, my 3 year old refuses to even look at the instructor. I am wondering if there is something in my behavior that is making them unwilling to participate or interact in group activities? Are there some gentle ways that I can encourage them? I am not too concerned yet, they are still learning after all, but I would like to encourage them to be a bit more confident socially.

So I put the question to some of the members of Team 101 and here are our suggestions;

I tend to think that our society expects too much of our children too soon when it comes to social interaction and independence.  I worry that pushing early independence is often at the expense of creating and nurturing a strong bond to family and a select handful of other people who truly love and care about our children, and that we may pay a dear price for this as our children grow up.

So I feel you are doing an wonderful thing by attending the music group with them and by allowing them to stay with you and hold your hand without pressure or coercion to join in when they are obviously not ready or simply not interested. By doing this you are showing them that you will always be there for them, that you value the bond they have with you above all else, and that you love them, no matter what. There is no better way to build confidence in children than by being their rock, the place they know they can always go back to when they need it.

There can be a lot of pressure to push your children to join in or be social before they are ready. I know I felt very pressured to ‘fix’ my very shy preschool aged twins and it took me a while to accept that it was ok for them to be shy, that is part of who they are. It was also ok for me to give them time to be ready, not all children develop at the same rate.

Happily joining in yourself is an excellent way to model appropriate interaction and show them how fun something can be. Also, finding the one activity or person that/who really ‘floats their boat’ can really help.  My girls wouldn’t even hold hands with children they’d known since they were babies, then one day I took them to ballet class, expecting them to simply sit and watch, but they ran off, joined in and held hands with strangers! Ballet was something they really really REALLY wanted to do.

Given time, love and a strong ‘rock’, I’ll bet your boys will take off and join in when they are ready.

I think most parents have felt that uncomfortable feeling that their child is acting differently to the social ‘norm’ of a situation. I certainly have. In the case of a class setting, I think our first reaction is usually to try and draw our child in, to encourage them to do what everyone else is doing either verbally or by enthusiastically participating ourselves. Sometimes this works but oftentimes it doesn’t and drawing attention to the situation in front of other people can make an already reluctant child even more self conscious and reluctant to participate. Instead I would suggest;

– Seeing the class or group setting as an opportunity for your children to observe important social learning. Your child will see, hear and learn from your own participation and interactions, as well as those of the other adults and the other children, whether or not they participate in the same way that the other children do.

– Try to catch your child doing the ‘right’ thing, even if it is even the smallest positive change, and positively reinforce their success. For example, your son might nod and smile to himself in response to a question from his swimming teacher. Although you would like him to look at the teacher, his actions show that he is listening and responding to the teacher and that is something that can be acknowledged.

– Whilst playing Immy often reenacts observations she has made in social situations with her toys (especially small figurines). I gave an example in a previous post from when Immy was just two;

Immy and I recently went on a play date with a new group of children we had not previously met. Immy is just two, the other children ranged from 2 1/2- 3 1/2. During the course of the play date, there were a couple of ‘incidents’ involving sharing and turn taking (or rather the absence of it!) amongst the children, which is completely normal for children within this age range. At one stage, Immy and another little boy tussled over a play teapot and Immy had difficult understanding why it wasn’t yet her turn, even though she was saying, “My turn now.” We had a few tears of frustration which are simply a normal part of being two and learning about the world.

Shortly after we got home, I heard Immy saying, “My turn now. Share. You share.” I peeked around the corner and saw her sitting with her two mini dolls in hand acting out what had happened earlier at the play date.

Now at 3, Immy still does this in her play and I have also been known to use this type of play to reinforce social messages with her. For example, Immy is learning to negotiate what to do when another child tries to take an item she is playing with (as an alternative to dissolving into tears) and sometimes I role play strategies, such as words to say, with her figurines as we are playing together.

– As Cath recommended, allowing your sons the opportunity to socialise with other children of similar ages on a more one to one basis can be valuable for their developing social skills.

Do you have any other suggestions for encouraging social and emotional independence in young children?

Inside: Our pick of the best YA dystopian books series for teens. If your … END_OF_DOCUMENT_TOKEN_TO_BE_REPLACED

Looking for a range of fun, high energy family games to play at your New Year's … END_OF_DOCUMENT_TOKEN_TO_BE_REPLACED