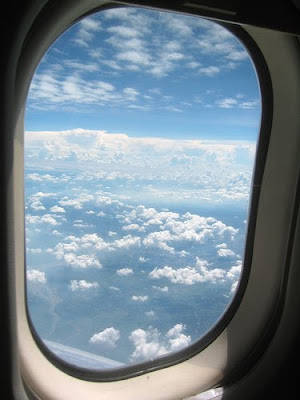 It’s just over a week until we (Immy, my Mum and I) jump on the plane for Singapore. I have travelled on planes with Immy before but not since she has become a real toddler – well and truly mobile and incredibly active, exceptionally curious and social, and occasionally, very temperamental!

So I have been searching the blogosphere for tips for toddler plane travel, hoping that those who have gone before me have both sound advice and inspirational wisdom to offer, preferably in the form of a ‘For Dummies’ manual that will see us both arrive at our destination fresh and refreshed, well fed and rested. A Mum can dream, can’t she?

The advice I’ve found can be described as some good, some questionable, and some, well, contradictory!

Unfortunately, we are not flying business or first class. Down the back in economy we will be, with Immy on my lap, which I am sure is a massive mistake given that she is now a 20 month old wriggle pot who doesn’t sit still for anything but Playschool. It is however, less than 5 hours to Singapore from Perth so I think we will manage (just!) We have requested the bulkhead row for more room to move around but I what I am really hoping for is a spare seat for Immy to sit on.

Flight times seem to be an important consideration when flying with children. When Immy was a baby she would fall asleep quite quickly on the plane and sleep most of the way from Sydney to Perth so I would usually book a flight that coincided with sleep time. This time, I am doubting it will be so simple as she is way too interested in what’s going on around her (read, total busybody!) We fly out late morning so I am counting on a bit of fidgeting and socialising, followed by lunch, a feed and a snooze, with time afterwards for some kids viewing (unless I am really lucky and she has a massive sleep).

There seems to be two schools of thought when it comes to boarding the plane. The first suggests boarding early so that the toddler has time to look around and get her bearings before being restrained for take off. The second advocates boarding last so that the toddler has the maximum amount of time to run around (read, exhaust herself) before being encased in a metal tube for hours. I am leaning towards the latter option with the possibility of sending Mum on first to get our carry on luggage stowed so that Immy and I can just board and sit straight down without mucking around with baggage.

There seems to be a consensus that lots of snacks are a good thing and I have found a number of good suggestions. I am thinking of taking little containers of sultanas and cheerios (dry cereal), packets of Tiny Teddies and crackers with the cheesy dip, and some pre-cut fruit. I know small foods can be easily spilt (which is a bad thing) but I am thinking they take longer to eat (which is definitely a good thing). I may have to invest in one of those snack cups with the lid that the toddler pushes their hand through to try and circumvent the spilling problem. I am also thinking that less sugar, colouring and additives will be a good thing.

We have ordered a child’s meal for Immy and had the wonderful suggestion from @sunnyroadmum to, “Ask the hosties if they can bring her meal first so you have a chance to feed her before yours arrives.” I love this idea as I never get to eat on the plane when travelling with Immy, she is always in the way and the food is hot and messy when juggling a squirming toddler or sleeping bubba.

There are all sorts of suggestions for toys and activities to keep Immy busy during the flight.

Make sure to pack plenty of things to entertain your toddler, such as toys, books, and some comfort things such as a favorite blankie or stuffed animal.

You might also consider going to the store and letting your toddler pick out his/her own carry on bag and a few inexpensive toys that will be used only once on the plane. Be sure to pick out a few toys without your child seeing so that he/she has an extra surprise when he/she opens his/her carry on.

I am not sure about packing a child’s favourite comfort toy for the plane as I can only imagine the grief if it was left behind on the plane or lost. I think a favourite soft toy is a good idea but maybe not the irreplaceable, most favourite comforter.

I like the idea of letting Immy have her own little bag of goodies but am concerned that I will just end up carrying it! I love this little backpack which also includes a safety strap for Mum to hold to prevent toddlers wandering off in the airport. It also includes a chest strap so the toddler cannot remove it.

I will definitely be packing both a few new and a few familiar toys/activities though I found that the last time we flew, Immy was more interested in pulling everything out of the seat pockets, destroying the contents of the airline provided kids pack, and socialising with other passengers, than in anything that I had packed to entertain her.

I think we will go with some stickers and a notepad, a mini magna-doodle, one or two favourite books (including her family photo album) and whatever else I can find at the shops that is not noisy and does not contain little pieces that can be easily dropped or lost. I like the idea of this Quiet Play book which includes lots of interactive play pages but think its a little on the expensive side.

I am confused by suggestions I have read of playdough as a great on board activity? Immy makes heaps of mess with playdough! We’ll definitely be leaving ours at home.

Be sure to pack 2-3 changes of clothes for each of your children. You will need this in case they get sick, spill something on themselves, or in case your luggage gets lost. – Toddler Travel

And another great @sunnyroadmum suggestion;

Pack changes of clothes for you and the toddler. Prepare zip lock bags each with a nappy and a change of clothes so you can quickly grab them for a trip to the loo.

So I will definitely be taking multiple changes of clothes for Immy and at least a change of top for me (each packed into a separate zip lock bag), otherwise Mr Murphy is sure to dictate that we need them five minutes into the flight. I don’t fancy sitting in wet (or worse, smelly, vomit-stained) clothing for five hours.

I will be taking plenty of nappies and baby wipes, although I did have the idea of putting on a double layer of nappies (reducing the likelihood of leaking and/or odour penetration) to avoid the challenge of changing a struggling toddler on a change table the size of a playing card balanced precariously over a toilet in a tiny toilet cubicle.

The most bizarre tip I found;

When the girls were young, their bodies responded to what they ate, so we gave them a few slices of banana the day of the flight and it seemed to help reduce the number of dirty diapers. teaching-tiny-tots.com

I am all for reducing the likelihood of changing a poo-ey nappy on the plane but think we will just leave that one to fate.

And my favourite piece of travel advice;

“Wear spunky clothes and dark glasses so that other passengers think you are someone famous enjoying quality time with your kids.” – Flying With Kids

So, that will be me doing a Nicole Richie with super big dark glasses and accessory toddler on my hip, sauntering out of the plane, fresh as a daisy!

P.S. Thank you to everyone who voted for Childhood 101 as Best Parenting Blog in the Nuffnang Asia Pacific Blog Awards. Voting has now closed. Winners will be announced at the Awards Ceremony to be held in Singapore on October 23rd.

Inside: Our pick of the best YA dystopian books series for teens. If your … END_OF_DOCUMENT_TOKEN_TO_BE_REPLACED

Looking for a range of fun, high energy family games to play at your New Year's … END_OF_DOCUMENT_TOKEN_TO_BE_REPLACED